Here be Dragons: A Seasonal Summary


Sitting inside as Tropical Storm Huberto is tipping it down on the heaths, I thought it might be a good idea to reflect on this summer’s Odonata Adventure, and appreciate how this rain is nicely topping up all of the ponds, pools and bogs for all of the dragon and damselfly larvae to enjoy! Silver linings.

Firstly a throwback to last week, when there was still a little bit of lingering sun, to this beautiful Southern Hawker I found basking on some gorse. I think it is a male, although feel free to get in contact and let me know if I’ve made a mistake, and as adults they spend the majority of their non-breeding time hunting for prey quite far away from waterbodies. This species of Hawker can actually be found flying out and about up until November (if they make it through this rain), and is one of our more inquisitive species, so you might find you become the observee not the observer. The Southern Hawker was actually the last species on my list that I have recorded since starting the blog series this summer, and not a bad one to finish on! 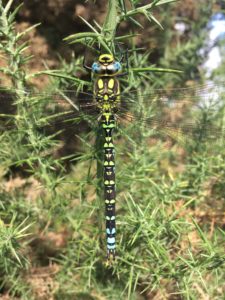 Right, down to brass tacks, in my first blog I set the task of finding and photographing as many as possible of the (roughly) 57 species of dragonfly and damselfly that have been recorded in the UK. Now, the photography side of things turned out to be slightly tricky, so thank you to all of the people whose pictures I borrowed, but I have managed to see a grand total of 24 species! Not bad for a newbie. For anyone interested, and I know you all are, the full list of species is as follows; 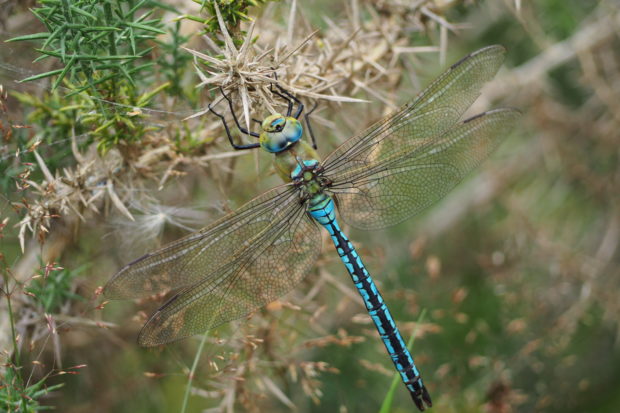 Some I had a great look at, others were a brief buzz past my head, the Brilliant Emerald Dragonfly is slightly contentious as it was half dead when I found it. But it was still technically alive, so it is going on the list. Trying to pick my favourite dragon/damselfly is like trying to pick your favourite child, or more relevant for me, my favourite reptile. But I can narrow it down. Originally Broad-bodied Chasers had a special place in my heart, but seeing the massive Golden-ringed and Hawker species, I can feel my loyalties being torn. My favourite damselfly is very easy though, the Banded Demoiselle wins first place, for its ridiculously pretty shiny colouration and mesmerising dark wing spots. Seeing them flutter above a stream in the sun takes me to my happy place. It also helps that I was actually able to get loads of photos of these guys. A special mention has to also go out for the Small Red Damselfly, a rare species restricted to heathland habitats, highlighting the importance of our Thames Basin Heathland SPA, not just for birds but for plenty of other plants and animals. I had the pleasure of seeing these mini damselflies for the first time this summer, they look just like little bright red matchsticks hovering around. Tiny and red with red legs is their defining feature! 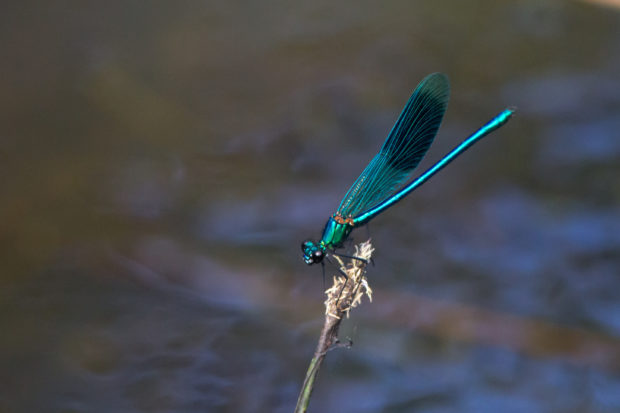 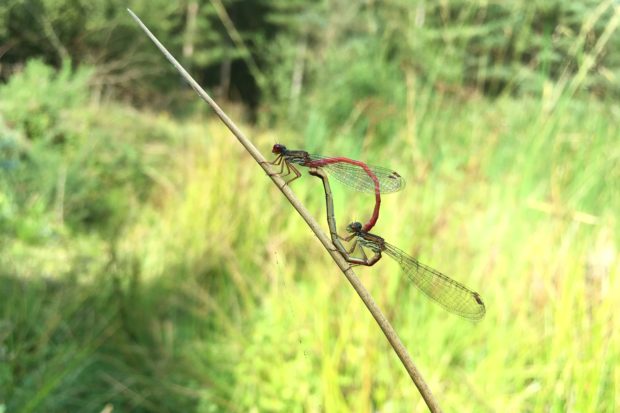 A pair of Small Red Damselflies. Photo by Warden Flo

There is still the opportunity to see some of the later flyers (like the Southern Hawker) all the way up until November if the temperatures stay relatively mild. They won’t necessarily be around water, exploring meadows, woodlands, gardens and even built up areas in search of prey. Larvae will be scoffing themselves in preparation for winter, but will continue to be feeding as winter sets into the ponds. In the meantime, before spring 2020 I’ll be revising over some ID guides and books, I’ve got to beat my score of 24 species next season!

<< Here be Dragons: The Birds and the Bees and the Abdominal Claspers