When Countryfile came to visit

Back in July I had the opportunity to help Countryfile at Ockham Common, searching the heather for one of our rarest reptiles, the sand lizard.

The Thames Basin Heaths are home to an incredible variety of plants and animals, some of which can only be found on heathlands. Ockham and Wisley Commons are no exception, providing a home to nightjars, green tiger beetles, rare reptiles and much more. So, fingers were crossed for a few of these to make an appearance for the cameras! 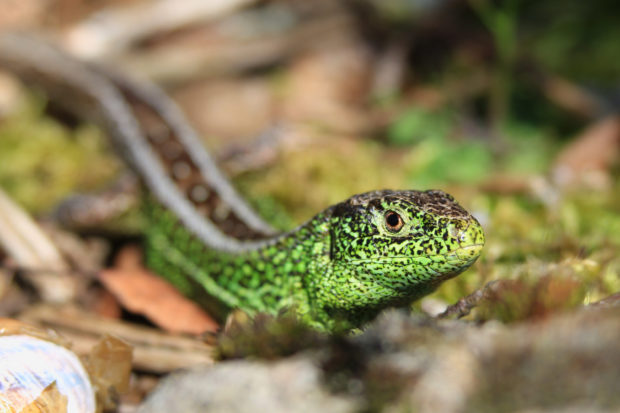 Arriving early in the morning we began our hunt for sand lizards, the rarest lizard in the UK, and whilst they’re present in good numbers at Ockham, the pressure was on! Whilst Ralph Connolly from the Amphibian and Reptile Conservation (ARC) Trust was filming with Margherita Taylor from the BBC, myself and Ben Habgood from Surrey Wildlife Trust were keeping our eyes peeled. Sand lizards use sandy areas (surprise surprise) to dig burrows for eggs and hidey-holes, so we concentrated our efforts on the bare ground scrapes where we might catch a glimpse of them.

Time was getting on a bit, as the temperature started to rise and the chance of finding a cool sand lizard that wouldn’t just immediately scuttle off into the undergrowth was receding… Slowly walking down one of the scrapes I noticed one of the metal tins used for reptile surveys, and thought I saw something move to the side of it. But maybe my eyes were playing tricks on me. Returning after ten minutes I was rewarded by a beautiful female sand lizard lying out on top of the tin! Backing away slowly I signaled Ralph and the crew to come in and get some shots. 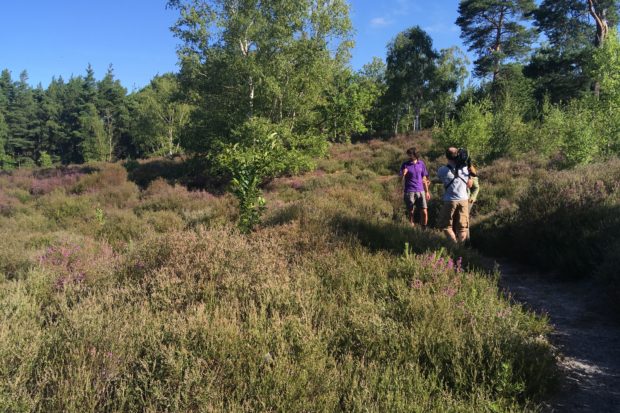 Filming the only wild lizard of the day!

Pressure off we continued searching on the off chance of finding a bright green male digging a burrow, and whilst quite a few were around, only tail ends were seen as they scarpered off into the heather. Still, one wild lizard was enough and Ralph had a beautiful captive female and babies from their conservation programme to show off to the cameras!

But it wasn’t just sand lizards that featured on the show, check it out on BBC iPlayer to see the segments on the conservation grazing belted galloways, fabulous nightjars and for a bit of history you can find out about the semaphore tower! So many people visit Ockham & Wisley (and all of the other Thames Basin Heaths), and it is fantastic to see them recognised as the special places they are and to get a slot on prime time television!