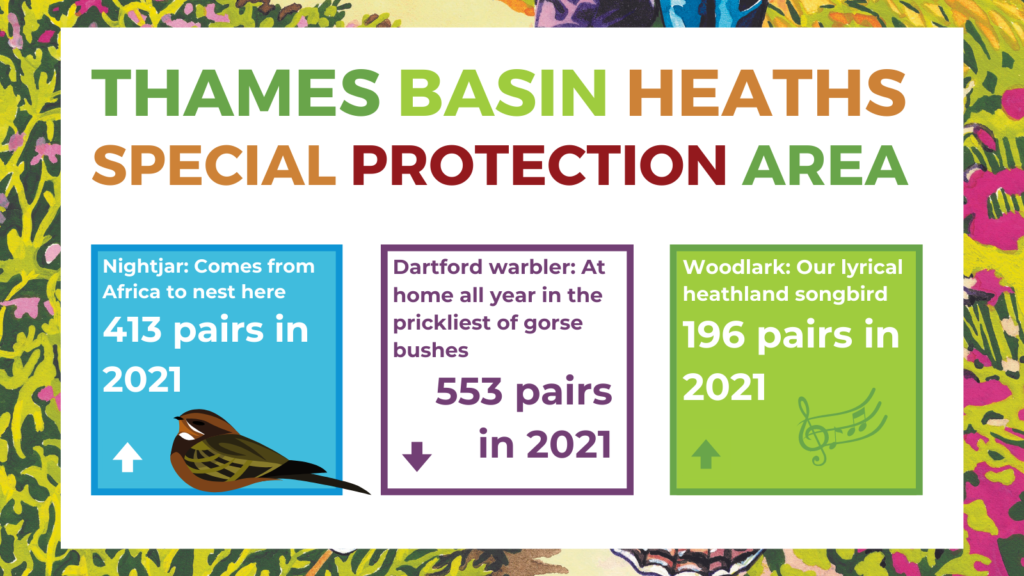 The Thames Basin Heaths Special Protection Area was created to protect three species of rare bird, the nightjar, woodlark and Dartford warbler. The numbers are monitored by a team of volunteers coordinated by 2Js Ecology and we’re delighted to announce the 2021 results. By sticking to main paths, keeping dogs out of vegetation and helping to prevent heathland fires, you have yet again helped the birds achieve record numbers.

In the late 1990s, when the Special Protection Area was first being discussed, a baseline number of breeding pairs was recorded. Compared to those figures, all three species are doing well. The nightjars had a particularly good season with 413 territories recorded in 2021, the highest on record, up from the previous high of 404 in 2020. And we’re really happy to see the number of woodlarks increasing gradually. The picture for Dartford warblers is more complicated, the number of territories is down on the previous season when exceptionally high numbers were recorded, but it’s not a cause for concern. Their numbers were steady on most sites although there were significant reductions on Chobham Common and Ash Ranges. At Chobham, wildfires in 2020 reduced the area of suitable habitat, while on Ash, restricted access may have resulted in an underestimate. A brief spell of severe wintry weather may also have affected the population, particularly on large sites such as Ash where there is limited shelter from snow.

The table below compares the 2021 totals with the numbers from 2020 and the year of the relevant baseline survey.

A huge thank you to everyone who’s played a part in this brilliant result.

Nature is complex, but factors that will help maintain the upward trend include…

What does it mean for you?

The Special Protection Area was setup to protect these rare breeding birds, but it does so much more than that. It protects the heathland habitat for all sorts of wonderful wildlife, and of course gives the landscape we love a huge amount of protection from inappropriate development.