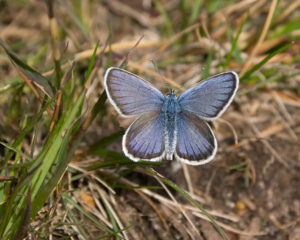 In Britain the Silver-studded Blue butterfly is almost exclusively tied to lowland heathland. It’s nationally scarce and extinct over much of its former range because of habitat loss. The Silver-studded Blue requires warm soil conditions and therefore needs short vegetation – preferring young heather on south-facing slopes. The food plants for the caterpillars include Heather (ling), Bell Heather, Cross-leaved Heath and Gorse. Bell Heather and Cross-leaved Heath also provide a nectar source for the adults as they flower earlier than ling. It has a close association with two common heathland ant species – the caterpillars pupate within an ant’s nest and will even attend the newly emerged adult butterflies until they fly. The ants require warm, open areas and the female butterfly will only lay her eggs where she can detect ant pheromones. 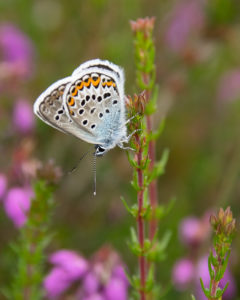