A closer look at the silver-studded blue

The silver-studded blue butterfly is one of the standout species of a heathland summer. Data Analyst Daria takes a closer look at this fascinating rare butterfly and its amazing lifecycle…

Blue or brown? – “stud-ning” either way!

Silver-studded blues are sexually dimorphic, meaning that males and females differ in appearance. Male silver-studded blues have blue upper-wings with a dark border, whilst females have brown upper-wings with a row of very weak orange spots on the hind wings. The undersides are brown-grey with black spots, and silver-blue spots (“studs”) at the rear of the hind wings, giving the species its name.

From eggs to adults and around again – Life cycle

The species is mostly single-brooded, which means the adult female lays eggs only once a year, usually between June and August. She will mate soon after emergence [1]. Eggs hatch between mid-February and mid-May, and the larvae can be seen during the same period, when they pupate for approximately six weeks before emerging as adults. Silver-studded blue adults will typically emerge from the end of May to mid-June, and this butterfly can be seen on the wing until late July or, rarely, the beginning of August. 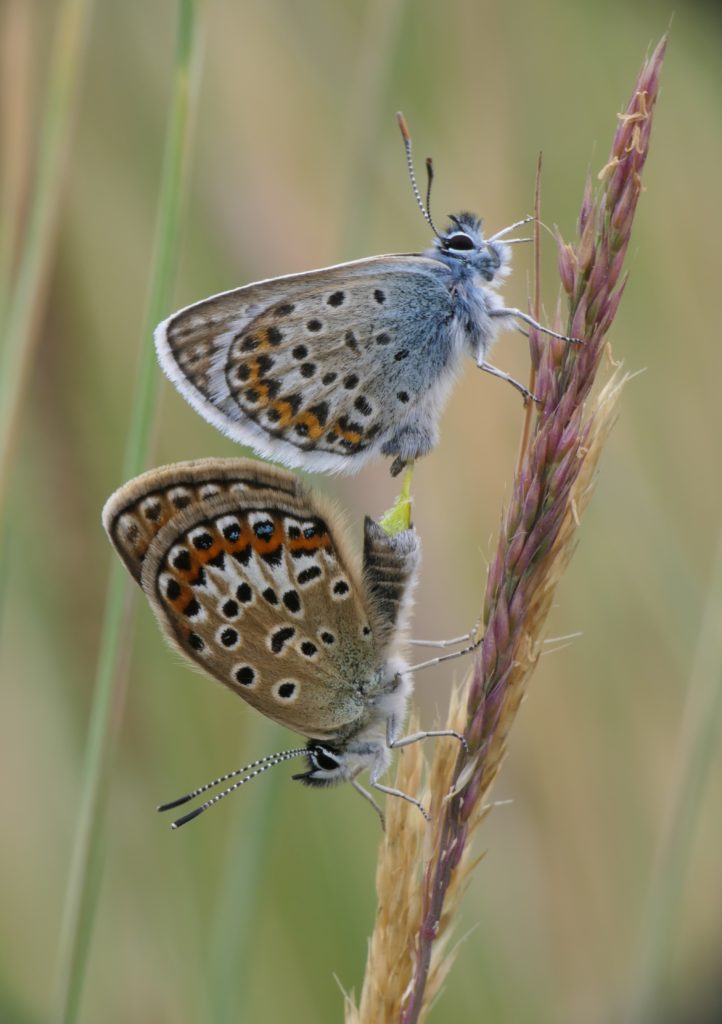 Note the differences in base colour of the undersides. (Top: male / Bottom: female) [Photo: Michael Jones]

The silver-studded blue is one of the few species that has a mutualistic symbiotic relationship (where both species benefit from the other) with ants (also known as  myrmecophilism) [3], specifically two species of black ant, Lasius niger and Lasius alienus [8]. The female silver-studded blue lays her eggs in the vicinity of the ants’ nest, and when the larvae hatch, the ants transport them into the nest and “farm” them for sugars, which the larvae secrete in high quantities. The larvae benefit from being kept clean, avoiding diseases, and the ants benefit from the sugars. But the “kids” need to eat… so the ants also escort the silver-studded blue larvae out to feed at dusk and guard them against predators, including other ants [9]. When the time comes, the ants allow the larvae to pupate in the corridors of the nest and accompany the adults out when they emerge. A real example of helping one another! 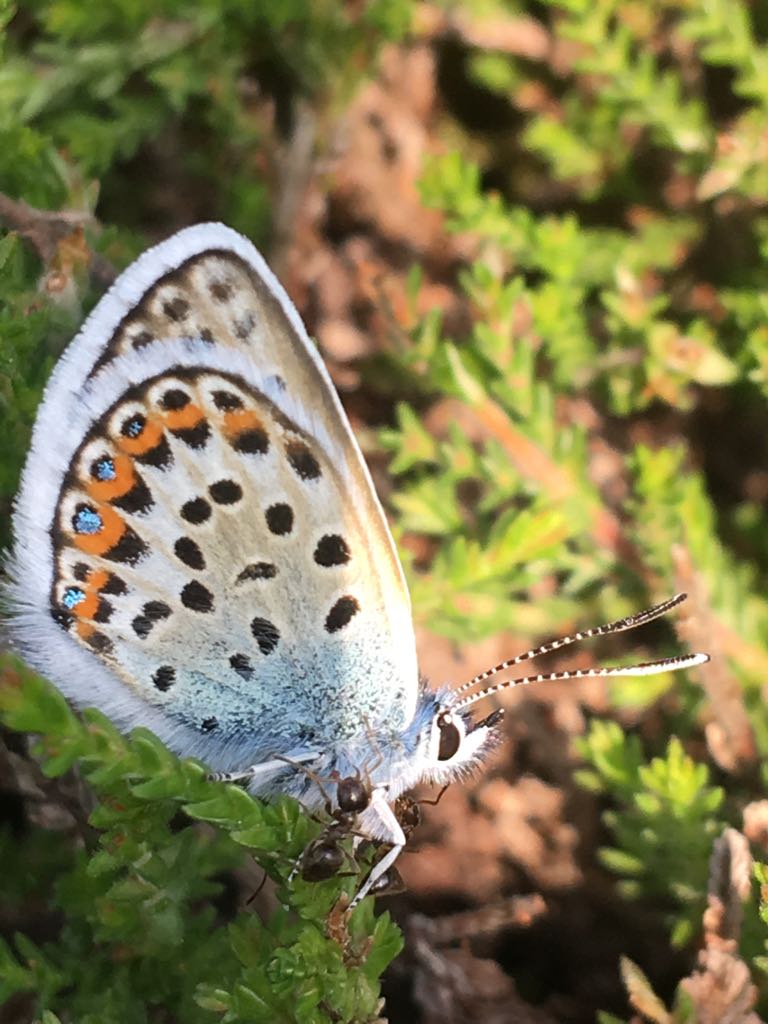 An adult silver-studded blue being attended to by ants [Photo: Joanne Wilsher]

Silver-studded blues can be seen in colonies that are largely sedentary, with individuals flying a maximum of 50 metres away [2;3]. Colonies of this beautiful butterfly are, therefore, thought to be generally well-defined and static. This means that if one saw a group of silver-studded blues in the same spot over a few days, it would likely be the same colony. However, one would be unlikely to encounter the exact same individuals, as adults only live for 4-5 days.

The sedentary nature of silver-studded blue adults has been disputed [4], especially due to evidence of genetic mixing between colonies [5].

Most colonies contain less than a thousand adults, with some exceptions of huge colonies made of tens of thousands of individuals [6], surely a sight to behold! In the late afternoon, adults often congregate in roosts on bushes or grass tussocks [7]. 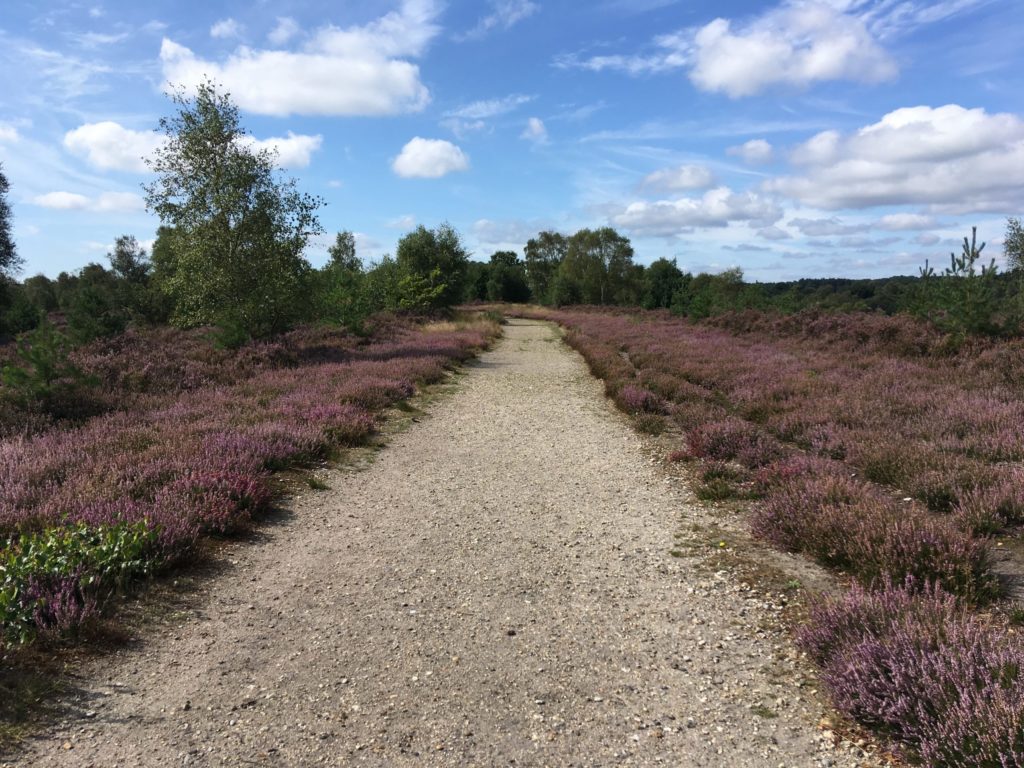 A heathland track fringed by short-cropped heather is the perfect place to look for a silver-studded blue colony [Photo: Nicola Buckland]

Silver-studded blues have very specific habitat requirements and rely on a mosaic of mixed age vegetation to survive. Habitats can fall out of condition quickly, so active management is key to the success of this species.

Table 1. Trends in distribution (occurrence) and population (abundance) of the silver-studded blue butterfly based on information from the The State of the UK’s Butterflies 2015 [11].

[8] Seifert, B. (2018) The Ants of Central and North Europe. lutra Verlags- und Vertriebsgesellschaft.

You can help this amazing species by joining in with Silver-studded Blue Watch 2021. All you need to do is keep an eye out for the butterflies on your heathland walks and report your sightings. For more information, click here or click the banner below.