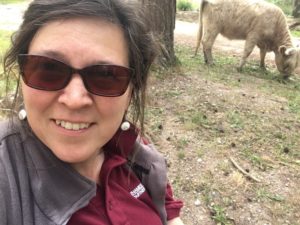 Warden Trudi and the wayward cow

Ever wondered what it’s like to be a warden in conservation? We are sometimes described as the eyes and the ears of a place, often recording and reporting things that we see. Sometimes it’s a bit like playing detective because you’re always trying to work out what has happened and why. Or at least, that’s what I like to think; I’ve always fancied myself as a bit of a detective. Perhaps a better description though would be more in line with the traditional dictionary citation ‘a person responsible for the supervision of a place’ or guardian. Detective or guardian, or both? Decide for yourself, as I share with you my warden diary with all the highs and the lows of the role. Hopefully you’ll get an insight into this interesting and sometimes challenging role. I promise to spare you nothing. Not even, for example, the thing that is stuck to my shoe right now. Hint: it’s a 3-letter word beginning with p, and you don’t need to be a detective to work that one out!

If you’ve been paying attention and reading our website, you’ll know that the Thames Basin Heaths covers a fairly large area on the borders of Surrey, Berkshire and Hampshire. It’s beautiful, but fragmented, and faces huge pressures mainly from the need for housing development. However, because of its rare ground-nesting bird population, it has Special Protection Area status, which helps to keep it a special place. Keeping it this way brings with it many challenges, and this is where TBH Partnership wardens come in!

My job, as part of a wider team, which includes people from partner organisations, is to help ensure that we protect this beautiful habitat and landscape, with all its many cultural, historical and wildlife associations, for future generations. It’s a job that affords much variety, as you’ll see. It’s a job that promotes health and wellbeing through fresh air, exercise and appreciation for nature, and I’ve always been passionate about nature and landscapes. Heathland is a calm place (mainly). It affords time and space to be yourself away from the demands and craziness of modern day life. The writer E.E. Cummings said ‘to be nobody but yourself in a world which is doing its best…to make you everybody else, (is) the hardest battle that any human being can fight..’. Heathland has a quality that allows escapism. You can fill your lungs with fresh air, be free, and as I hinted earlier, investigate….

But it’s not all peace and love. There’s plenty of drama too. As you will see… 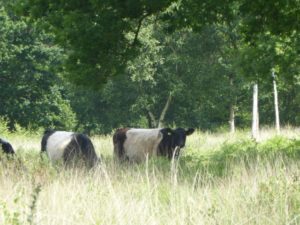 Sunday (10th) – spent the evening reflecting how unfit I am after chasing a cow. Let me explain.  I’d been enjoying a leisurely morning engaging with families and photographing insects – passing the time uneventfully – when I then found myself directing traffic as a disorientated cow (a Belted Galloway), part of grazing livestock on one of the Commons, went AWOL on a busy back road. Having made its escape through a damaged fence, when I spotted it, it was trotting at quite a pace towards a blind bend in the road with a stream of cars coming towards it; drivers staring out of windows in various degrees of anxiety and amusement. I spent the next half an hour running up and down the road trying to shoo the cow back towards the fence line and the herd. Luckily, a fast-acting member of a Wildlife Trust grazing team turned up, and after much running around, and a very sweaty warden later (it was a boiling hot day and I’m by no means fit), the cow was corralled back in to the enclosure and to safety. Phew.

Next I found myself reflecting on my mental fitness. Following the cow incident I headed straight for a gentle activity: engaging with visitors. I spotted a father and his two young daughters sitting on the grass chatting away leisurely and so I joined them. The father, clearly chuffed that a warden had taken the time to chat with his family, thanked me for stopping and encouraged his daughters to engage with me. Cue funny questions: how old is gorse? Is it as old as my dad? How can you tell the difference between a male and female lizard? In this role you have your knowledge tested frequently. People ask you all sorts of things and we have a standard ‘frequently asked questions’ reference sheet, but it’s always the children who flummox you and make you laugh. I love their unpredictability! It’s one of the most fab things about the job! Adults ask wardens strange questions too. Here’s a flavour: “are you with the Jehovah’s Witnesses?”, “Did you know that I’ve just had a hysterectomy?”

Thursday (14th) – nearly jumped out of my skin when a large grass snake appeared on the track. It was about a metre away, and it was huge. Since becoming a warden I’ve been trying (and hoping) to keep my snake phobia secret and under control. The secret aspect went out of the window immediately when I nearly had a heart attack after seeing my first adder. It’s really not good for credibility having a phobia related to heathland creatures. But when I saw the humongous grass snake, I leapt backwards, grabbing my poor unsuspecting colleague and nearly pulled his arm out of its socket. The grass snake however, in contrast, slipped quietly into the scrub, dignity intact. My heart didn’t stop racing for some time. M, my colleague, just looked on with bemusement (and pain I suspect).

Saturday (16th) – reflecting on the week, I conclude that there’s no such a thing as a typical day being a warden on heathland. One minute you’re a farmer rounding up cows, the next you’re a teacher passing on your knowledge, and the next you’re facing up to your fears and phobias.  You can be on the run, meditative and still, or engaged in conservation, or simply waiting for the next drama…