This week I had the opportunity to visit one of the Thames Basin Heaths neighbouring heathlands, Thursley Common, for the launch of a brand new Dragonfly Hotspot! The British Dragonfly Society have been working with land owners across the country to create fantastic havens for dragonflies and damselflies, this time partnering up with Natural England on this massive heathland. 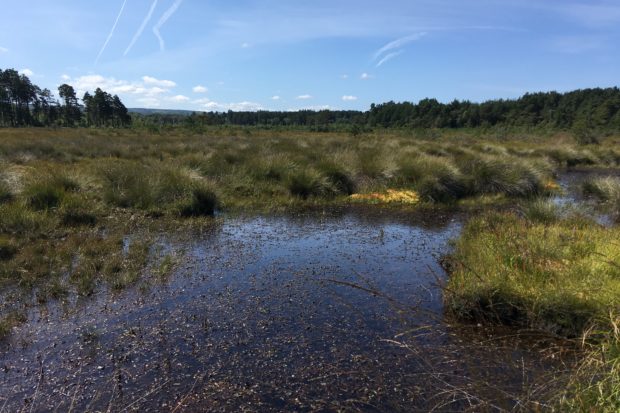 A lovely bit of wetland. If I was a dragonfly…

Thursley Common is designated as a National Nature Reserve (NNR), a Site of Special Scientific Interest (SSSI), and a RAMSAR site of international importance for wetland wildlife. Walking over the (very professionally made) boardwalk it is easy to see why this 326 hectare reserve is worthy of such accolades. It’s good. Very good. A little bit jealous actually. Reserve Manager James Giles, with his Natural England and Volunteer team, has done an amazing job improving and maintaining the dry and wet heathland habitats, making Thursley a magnet for wildlife.

With 26 dragon and damselfly species it was the perfect opportunity to absorb some dragonfly identification skills from a number of experts! The reserve contains a mix of ponds, peat bogs, mires, lakes, running water, basically everything an Odonata could dream of, and with the 1.3km easily accessible boardwalk, everyone can enjoy the heathland.

The 1.3km easy access boardwalk provides the perfect platform for spotting all kinds of wildlife, it is also a big favourite with the resident common lizard population!

Highlights of the day were Black Darters and a Southern Hawker (firsts for me), Keeled Skimmers, the endangered and habitat fussy Small Red Damselfly, and three massive Golden-ringed Dragonflies – with a female ovipositing eggs in one of the pools! Sadly I was not on my game with the camera, and there is only so much you can do with a phone on a warm day when nothing wants to sit still – so I have had to borrow a photograph!

Let’s choose the Golden-ringed dragonfly to focus in on today, before Thursely I had only ever seen one so getting a trio was pretty special. The female of the species is the longest dragonfly in the UK, with a long ovipositor (egg laying tube thing) giving them the extra millimeters. These are pretty massive dragons, with very distinctive black and yellow rings running down the body, and bright green eyes. They are supposedly fairly common… I haven’t been seeing too many but they do have quite a large range over the UK. We were lucky enough to find a female flying around depositing her eggs by dipping her abdomen into a bit of bog next to the boardwalk. One thing I love about this species is how they just loudly crash through the undergrowth as they fly – a boldly coloured species with a bold presence! 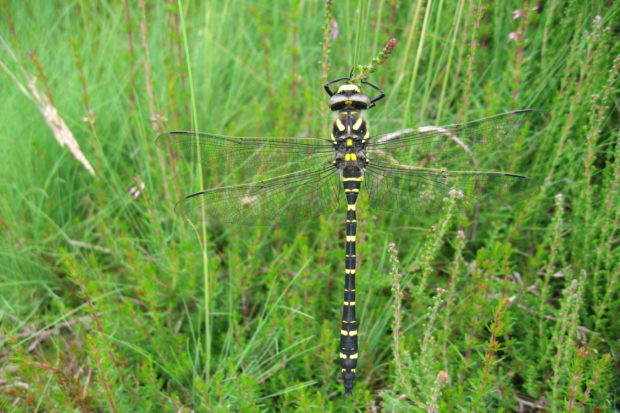 With warm weather forecasted over the next few weeks (don’t quote me on that though) there is still plenty of time to see some of the later emerging species buzzing around. So get out there! 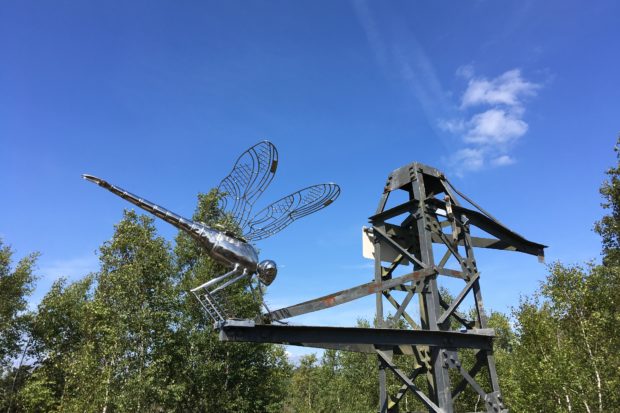 The dragonfly walk centerpiece, a beautiful statue signifying when SSE removed the once dominating overhead power lines and stuck them under ground out of view

<< Here be Dragons: If you go down to the ponds today…

Here be Dragons: The Birds and the Bees and the Abdominal Claspers >>