Here be Dragons: If you go down to the ponds today…

At the start of this blog series I said I would try and photograph as many of the UK’s dragonflies and damselflies as possible. Well, as you may have noticed from the last couple of posts, I have shamelessly been stealing my colleagues photographs (thank you Michael :D). Today however I can happily say that all photos below are my own (ok, one isn’t…but just one!). Which shows, as some are absolutely terrible! Michael our resident Odonata expert took me for a walk around some hotspot ponds on one of the SPA sites to see what we could find. Sadly the weather was a bit dark and miserable, but some sunny spells meant that we found a respectable 11 species in one morning! This is going to be a very photograph heavy blog so I hope your 3G is up for it…

First off, below are a couple of prime examples of fantastic odonata habitats. When looking for dragon or damselfies, ponds with vegetation are a good place to start as lots of species prefer it for laying their eggs. Of course species can be found on very open and running water, but look at these spots, if I was a dragonfly I would never leave. 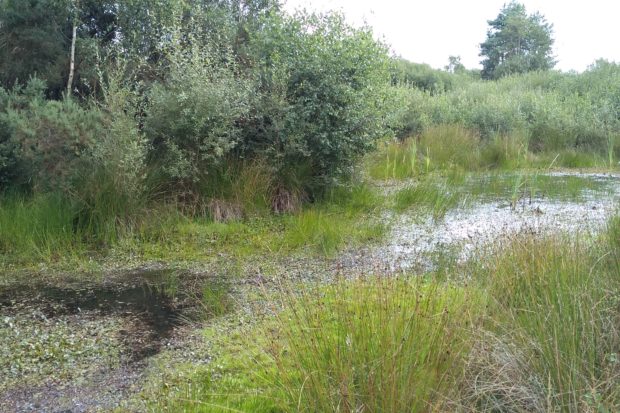 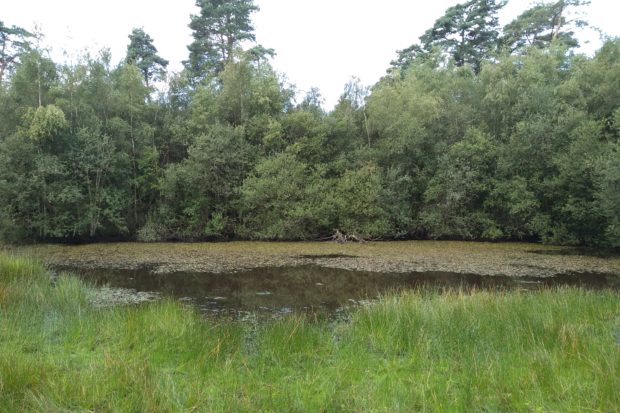 Species number 1 is this absolute gem! There’s no questioning why they are called emeralds, both the males and the females are pretty eye catching. They actually rest with their wings half outspread, almost like a dragonfly, making them quite unique among damselflies – which normally keep their wings closed behind them.
ID pro tip: metallic dazzle. 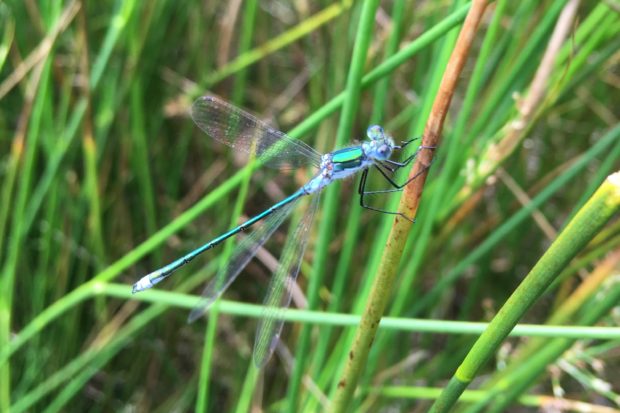 One of our most common species, commonly confused with the Common Darter, which we also found. The Ruddy Darter can be identified by it’s bold red colouration, black legs, brown pterostigma (rectangular spot at the end of each wing tip) and a narrow middle thorax.
ID pro tip: small red dragonfly in a corset! 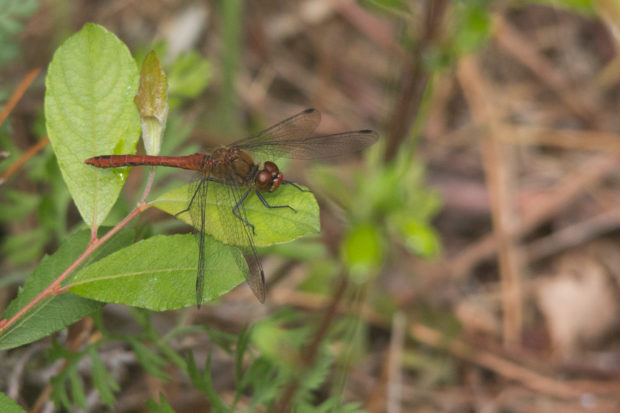 Ruddy Darter male, bit dark and bit out of focus (not a perfectionist, honest)

And the even commoner Common Darter, that can be found flying well into November! To tell them apart from the Ruddy Darter, look closely for a yellow/pale stripe on the legs as opposed to solid black. The abdomen also just tapers normally and does not have the “waist”.
ID pro-tip: if it’s small, relatively red/orange and isn’t wearing a corset, it’s probably a Common Darter. But yes, good luck with them and the Ruddys! 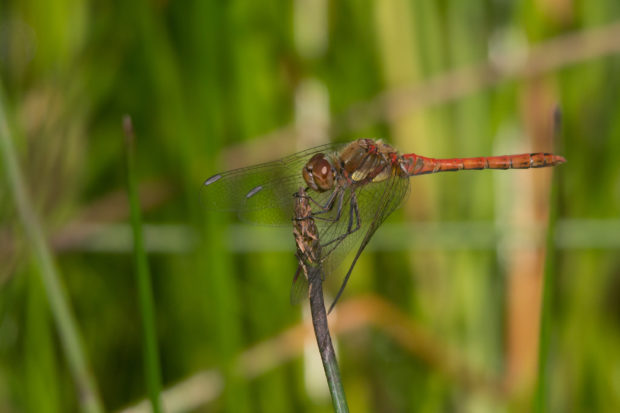 Common Darter male, note the lines on the legs, hard to spot but are there!

Ding ding ding ding! Got a rare one! I have been looking for these for a while with no luck, and with Michael’s sharp eyes and the right location, it has finally happened. These damselflies are restricted to heathland habitats in southern England and Wales, highlighting the importance of protecting the Thames Basin SPA! Red pterostigma a good indicator of species for this one.
ID pro-tip: small, red, and red legs! 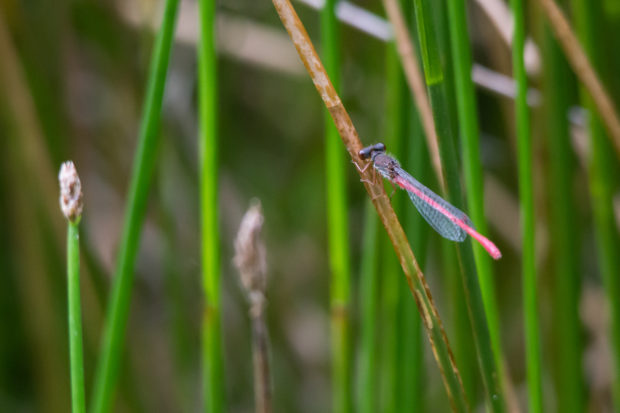 A brief encounter with a dragonfly that really did not want to be photographed. One of the featured Dragons on a previous blog, the keeled skimmer male is a fantastic blue with a ridge running along the abdomen. We saw an immature individual (not sure if male or female it gets tricky with young ones!), with slightly less impressive colouration, but still beautiful non the less!
ID pro-tip: for adult males, blue with a prism shaped abdomen. 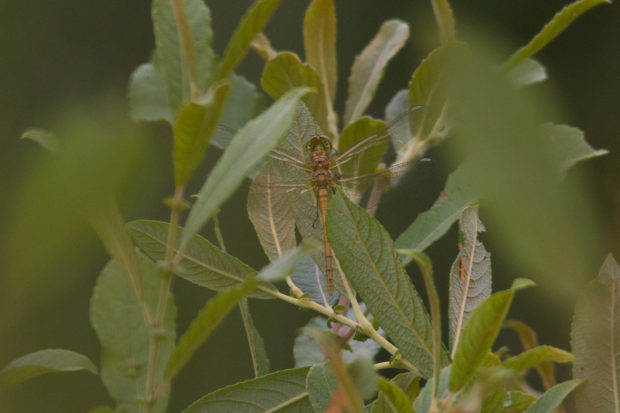 A tricky one, the males are fairly obvious with their darker abdomens with a bright blue stripe at the end. The females can be quite variable, with at least 5 different colour morphs all the way from blue to green to pink to brown! Probably need your ID sheets out for the females of this species, unless you have an expert with you! (we still used the sheets too). Also the photo is from Michael and not from our walk. Please forgive me.
ID pro-tip: males look like flying magic wands with a blue end. Females, err, check the book? 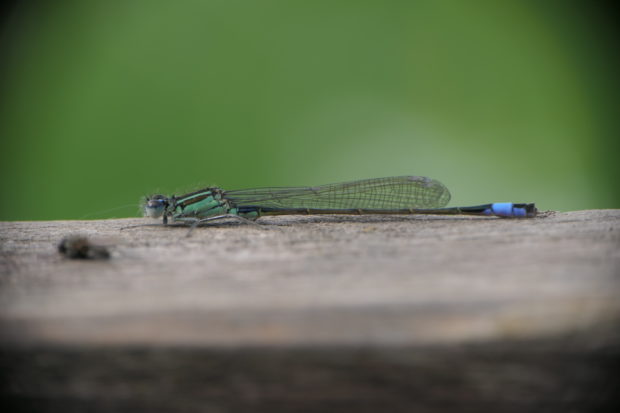 Ok I’m cheating here, these stunners featured in last weeks blog, and I have stolen the photograph from that one as I didn’t get any new ones! For shame…
ID pro-tip: larger colourful damselfly with tinted wings. 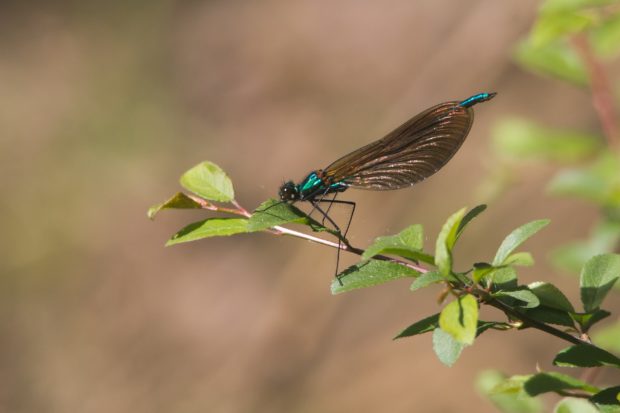 Again, this damselfly had a top spot last week, so I’ll keep this brief. I did get some new photographs though! You can see that the female only has a slight tinge to the wings. They normally hold the wings together behind them but I managed to snap a couple of stretching photos.
ID pro-tip: big blue blotches on male wings, dazzling green sheen females with pale tint wings. 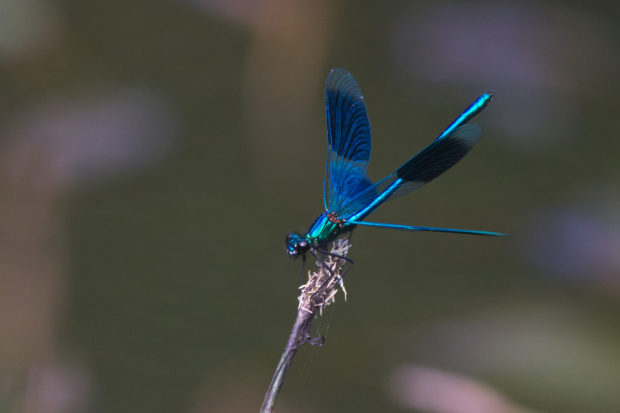 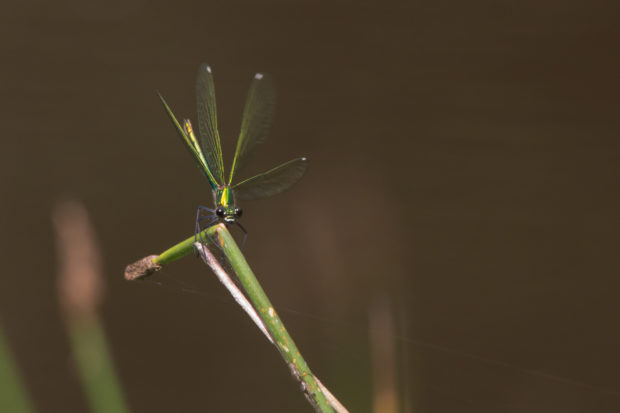 A large impressive Dragonfly found in a variety of habitats cruising around, smashing large prey out of the sky. These dragons rarely settle, eating their prey on the wing! They occasionally hover still when the females are laying eggs, but as you can see from the photo below if you are half a milisecond too slow pressing the shutter, you miss everything!
ID pro-tip: a slightly drooping blue abdomen, apple green body and BIG! 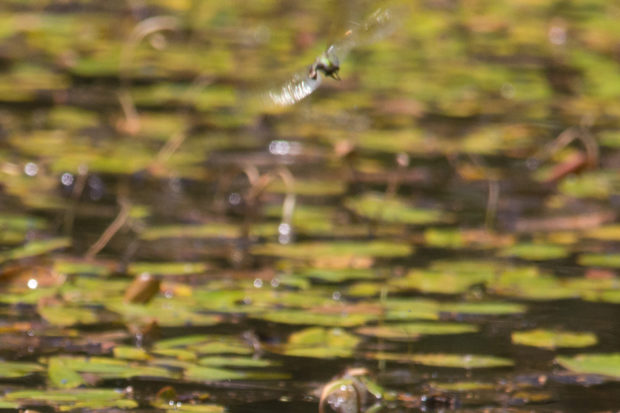 Turns out I have been seeing quite a lot of these around but just had no idea what they were! Again, one of those species that just will not sit still, unless they are freshly emerged (called a Teneral). An excellent example of the life cycle of the dragon and damselfies, that spend most of their life underwater as larvae, then climb up vegetation for an adult winged individual to burst out of the larval case. They need to warm up and pump their “blood” through the body and wings before they can fly. Sadly it looks like this Migrant Hawker had one wing caught on some vegetation and it has not unfurled correctly. Hopefully it will make it with 3 wings!
ID pro-tip: large dragonfly with brown/blue stripes, clear wings, and holds its abdomen slightly raised diagonally up as it flies. 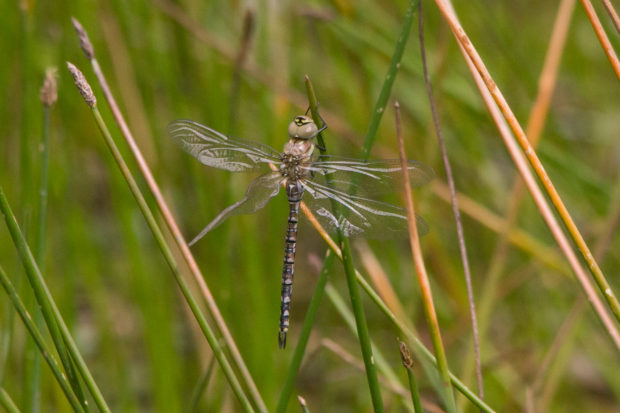 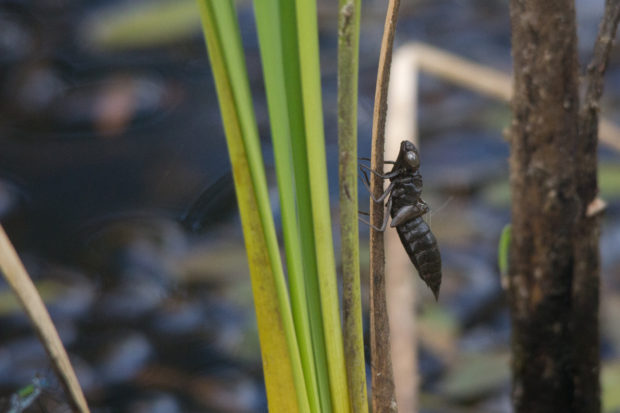 …and the larval case it emerged from!

Potentially the worst photograph I took on the day but another example of Odonata behaviour as well as a species! The Red-eyed Damselfly is quite small, the males are blue and the females are a much more subtle yellow/brown/black. And of course, red eyes! Well… the male has red eyes the females are brown. It’s never that simple is it! Here are a pair mating, I’m not going to get into too much detail at the moment, but essentially the male clasps the female behind the head with his abdomen, and the female curls her abdomen up to access the genitalia at the top of the male abdomen. Complicated right?
ID pro-tip: small damselfly with red eyes! 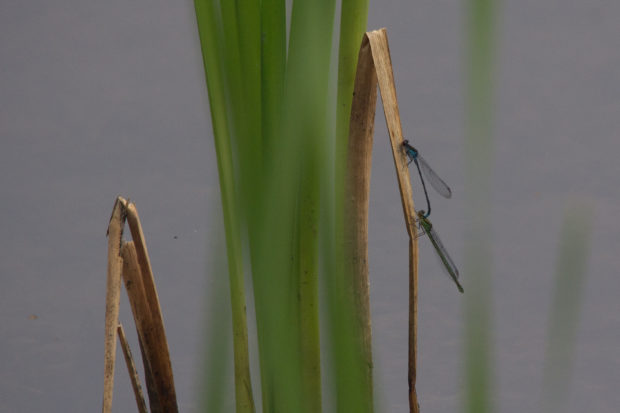 As I said, we found 11 in one morning and the weather wasn’t even that good. There is still plenty of time to look for dragonflies and damselflies, with many still active into September. So get out spotting! Thanks for reading and here is a curious Roe Deer that had no idea what all the fuss was about for a tiny red damselfly… 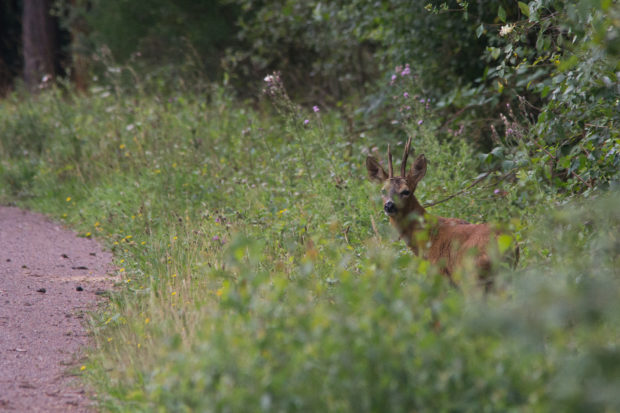 << Here be Dragons: Damsels not so in Distress