Migration is a gamble and every year an amazing 2+ billion birds make the long journey from their breeding grounds in Europe to their wintering grounds in Africa. For some this a journey that could last months and cover thousands of kilometres. It is fraught with danger and survival is far from guaranteed. The list of dangers faced by migratory birds seems almost endless; starvation, bad weather, predators, collisions and hunters all stand in the way of our birds completing their journey. The gamble may seem too large, but the ‘pay off’ at the end makes this annual pilgrimage worth it.

Unfortunately, humans have played a large part in making this already arduous journey even deadlier. Collisions with large man-made structures, such as skyscrapers or wind turbines, are becoming increasingly common as countries invest in large infrastructure projects. The effect of habitat destruction and fragmentation on migratory birds has been well documented over the years. Birds desperately need rest and stopover points to ‘refuel’ and a decline of suitable places forces species to fly for longer and further.

Despite legal protection, one of the biggest dangers for migrating birds remains illegal hunting. Every year 25 to 36 million birds are killed on their migration routes in the Mediterranean – whether this be shot, glued or trapped. And unfortunately this is mostly done for fun! Egypt appears the be the worst point, with anywhere between 5 and 10 million migratory birds killed per year in an 800km long trapping zone. Equivalent to the total length of Germany! Although the Mediterranean remains the deadliest part of many birds’ migration, other regions have also become hotspots for illegal hunting. Northern Europe and the Caucasus see hundreds of thousands of waterbirds and raptors shot every year. In Azerbaijan alone nearly 1 million waterbirds are hunted on passage.

Although this may seem a rather depressing and morbid subject, it is important to know the perils our summer visitors face when they travel to their wintering grounds. It shows us how important it is to look after our birds and the habitat they live in while they are here during the breeding season. The Thames Basin Heaths Special Protection Area is one of the most important wildlife sites in Europe and is a haven for ground-nesting species like Nightjar, Dartford Warbler, Woodlark, Tree Pipit and more. The map below shows the hotspots for illegal killing of birds on migration. The photograph above shows what awaits one of our most enigmatic birds while en route to Africa – 100+ Nightjars shot for fun! 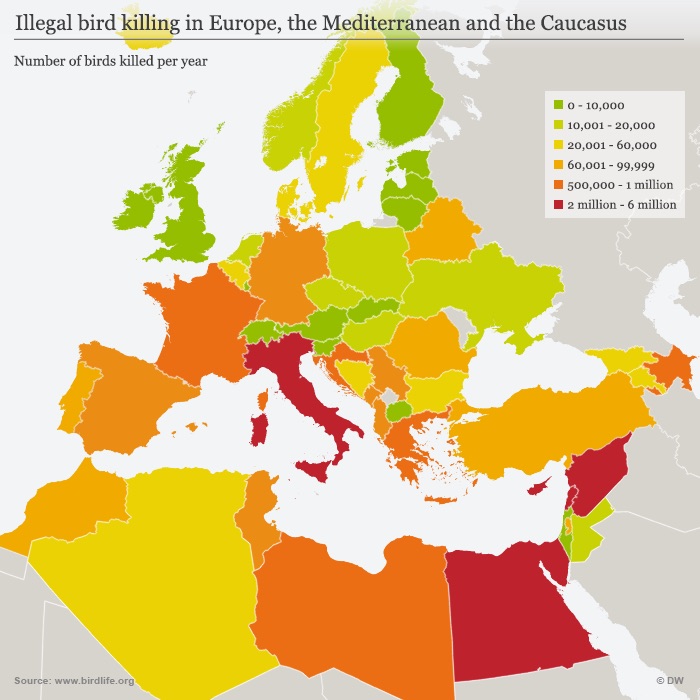