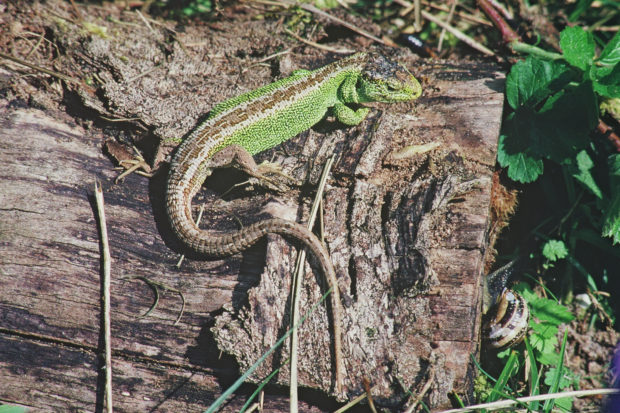 A male sand lizard in breeding colours is a sight to behold, and you would be forgiven for thinking something had escaped from a nearby exotic pet store! These beautiful reptiles are one of Britain’s rarest, being limited to a few protected heathlands and dunes. They’re definitely another species that makes the Thames Basin Heaths Special Protection Area so important! A tad more chunky than the common lizard, and the breeding males are incredibly bright! Females are a little harder to identify, but look out for three rows of spots running down the back. 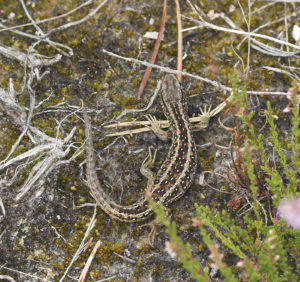 Because of their rarity, British and international law protects sand lizards from killing and disturbance, which includes the habitat where they live. You need a licence to survey, handle and even photograph them (if you are close enough to be causing disturbance). They need sunny areas with mature vegetation, and open undisturbed sand where they can dig burrows for their eggs. That’s why it’s important to keep to paths and avoid open heathland, as you may be disturbing these protected reptiles, as well as the ground-nesting birds.

The Amphibian and Reptile Conservation Trust have been working on reintroduction programmes for sand lizards, hoping to secure and expand their limited ranges. Currently around 9,000 animals have been released through Dorset, the Weald and Merseyside, with around a 65% success rate. Thanks to their fantastic efforts, 7 counties have re-established sand lizard populations!