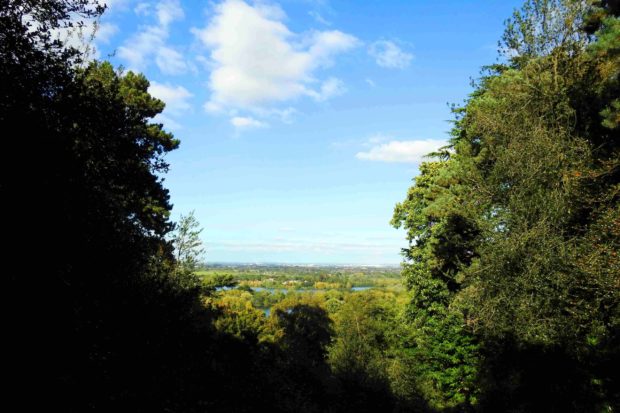 St. Ann’s Hill is a lovely greenspace near Chertsey. With wooded hillsides hiding more than bluebells, and amazing views from the top. There are also relics from the near and distant past that make this an amazing place to explore. But do you know the history behind this hill and the many lives it’s lived?

Follow my 20 steps through time to unpick 10,000 years of history and decide for yourself whether you’d rather have been an estate owner, monk, soldier or a just a passing visitor enjoying the views…

1. Formed naturally as a prominent gravel-capped, steep-sided hill topping out at around 70 meters, its flat top and commanding views made it perfect for the settlements that followed.

2. Mesolithic worked flints found on the hill date from 10,000 to 6,000 years ago, some of the earliest evidence the site was used by people.

3. An ancient hill fort was situated here around 4000 years ago. Limited artefacts, and damage due to other activities on the hill, mean precise dates for the fort’s existence are disputed. One of the few artefacts found is a spear head dating from 1650 to 1000BC. Early Bronze Age through to Roman material has been found, indicating that the enclosure was used over a long period of time.

4. A 1258 document lists “the vineyards on St. Anne’s Hill”. These were tended by the monks of Chertsey Abbey.

5. In 1334 a chapel was built by the monks of Chertsey Abbey (now ruined) and dedicated to St. Ann. This led to the name of the hill being changed from Eldebury or Oldbury Hill to St. Ann’s Hill. A natural spring called the nun’s well is associated with, or possibly predates, the chapel. Still there today it was originally deemed holy, said to have medicinal properties.

6. In 1440 Henry VI granted a fair to be held on the hill to mark the feast of St. Ann. Held annually until the dissolution of the abbey, it then moved into Chertsey town. The event is now known as Black Cherry Fair and is still celebrated in July.

7. During the 1500s the hill was owned by Laurence Tomson, secretary of state to Elizabeth I. He built the first house on the hill, living there until his death in 1609. It’s understood that he used the chapel’s ruins to build his house but it’s unclear when the chapel fell into disrepair.

8. In the mid-1700s Henry, 1st Lord Holland, was responsible for the hill but didn’t live there. The hill had a flurry of owners; in 1728 it belong to Catherine Barton, by 1732 Lord John Trevor, Speaker of the House of Commons, owned it, in 1769 his widow surrendered it to Lord Charles Spencer and he (Duke of Marlborough) sold the hill in 1785 to Mrs. Armistead.

9. From the 1790s politician and MP Charles James Fox, son of Henry, 1st Lord Holland, lived in St. Ann’s Hill House. His wife Elizabeth Armistead already lived in the house. She purchased it after they met it is thought, because of Fox’s gambling debts incurred in London’s high society. However the house became his property upon their marriage. They landscaped the gardens and added an octagonal summerhouse. Fox died in 1806 and their house fell into disrepair in the 1930s.

10. In 1842 Mrs Armistead died and the property passed to Henry Vassall-Fox (Charles Fox’s nephew), 3rd Lord Holland. Henry’s widow increased public access to the hill, built a summerhouse and landscaped the Dingle (an old quarry), adding three fishponds. She also built a chapel at the foot of the hill to practice Catholicism and was laid to rest there in 1889. 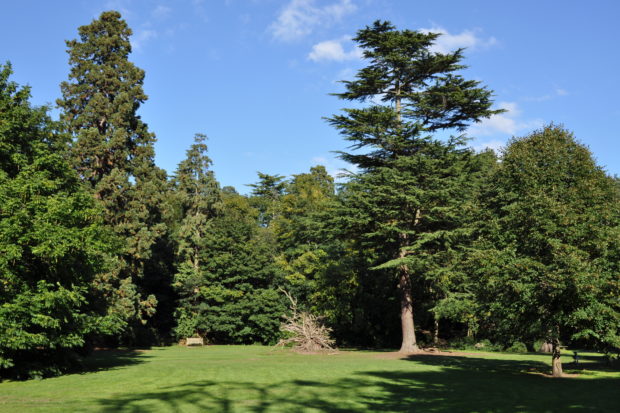 There are several redwood trees at St. Ann’s Hill, planted by Lady Holland around 1859

11. Around 1870 Chertsey Volunteer Rifle Corps stop using the hill for training. They were formed out of fear of an invasion of Britain during the earlier Napoleonic war.

12. By the 1910s, Sir Albert Rollit, a politician pushing a parliamentary bill in ­favour of women’s suffrage, owned the property.

14. In 1927 a covered reservoir was constructed by the West Surrey Water Company on the flat summit of the hill, resulting in one pond in the Dingle being backfilled.

15. The 1927 owner of St. Ann’s Hill House was Sir William Berry, a newspaper proprietor. In this year he gave the hill to Chertsey Urban District Council for public recreation.

16. Sir William Berry commissioned Percy Cane to landscape the hill before Neville Chamberlin opened it as an official public park in 1928.

17. St. Ann’s court is designed in 1936 and building soon starts. Commissioned by Gerald Schlesinger, a stockbroker and partner of Christopher Tunnard, they briefly lived there together despite homosexuality being illegal. Tunnard had worked for Percy Cane, when Sir William Berry had the hill landscaped.

18. 1980s owner, Phil Manzanera, converted part of the coach house into a recording studio. He was a music producer and lead guitarist with Roxy Music.

19. In 1988 a beacon on the hill is lit as part of the ‘Fire Over England’ event to commemorate the 400th anniversary of the sighting of the Spanish Armada off the English coast. 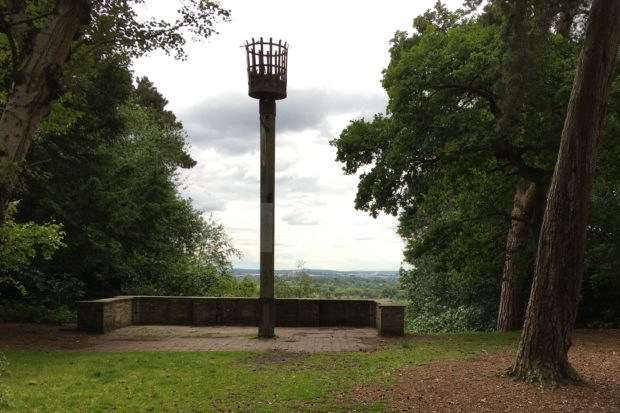 The beacon on St Ann’s Hill

20. The hill was grade 2 listed on the 15th May 2001 in recognition of the various planting, landscaping and buildings over the previous centuries.

Today the hill is beautifully managed for recreation and wildlife, alongside the landscaped gardens.

Find directions to St. Ann’s Hill, and many other interesting places across Surrey, Hampshire and Berkshire, in our ‘Greenspace on your doorstep’ guide. 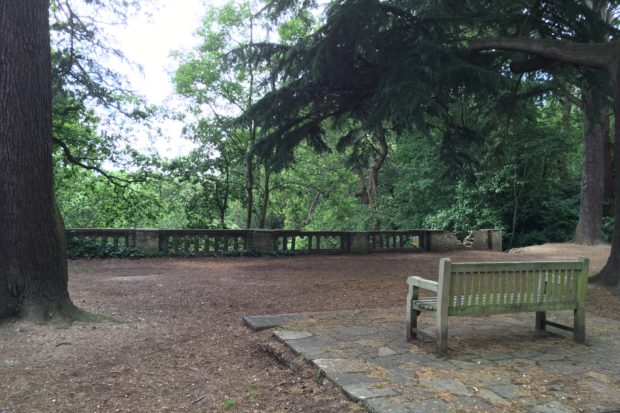 Relax in the woodlands of St Ann’s Hill