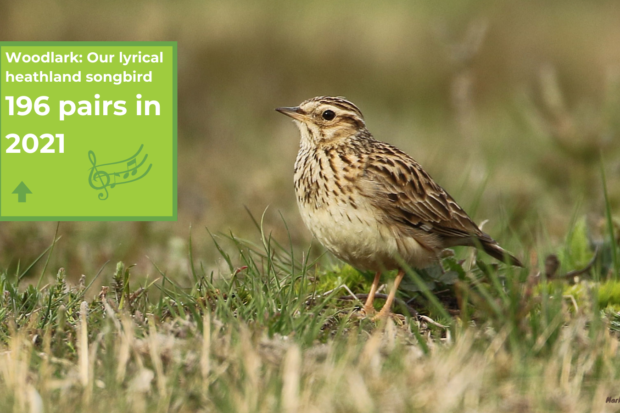 February and March are great months to find Woodlarks on the Thames Basin Heaths Special Protection Area. Warm, still mornings are best, but at this time of the year these aerial singers are establishing territories and can be heard throughout the day and even in the dark.

Listen for them over open areas of heathland. In my opinion, they are one of our best songsters, on a par with Nightingales and better than Skylarks. Their scientific name, Lullula arborea, derives from the onomatopoeic resemblance to part of its song, ‘lu-lu-lu’, but hearing one is just the start of the challenge. If you are lucky it may be singing from a tree or lower on a fence post, a bush or even on the ground, but more often it will be high in the sky – a tiny dot. If you can spot it you will see a small, broad-winged, short-tailed bird, hovering and circling and sometimes staying aloft until your neck aches trying to follow it. I once watched one in the air displaying continuously for 30 minutes!

If you do manage to see it at eye-level, you may not find it the most inspiring bird – a little brown job, similar but smaller than a Skylark, yet despite its unspectacular appearance, it’s a very special bird on the Special Protection Area. It’s the rarest of the three species for which the area is protected (along with Nightjar and Dartford Warbler). So it’s important that we look after it. It nests on the ground beginning in March so please minimise disturbance as far as possible.