An explosion of colour 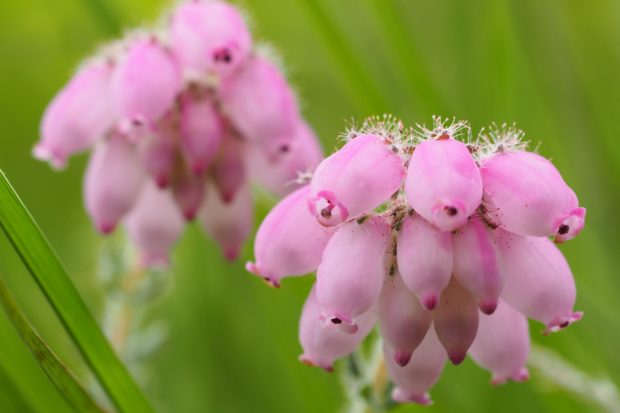 The heather is coming into flower across the Thames Basin Heaths, transforming the landscape and adding a much appreciated splash of colour to our heathlands. On the Special Protection Area we have three species of Heather. The two currently in flower are the Cross-leaved Heath and the Bell Heather, while Common Heather, also called Ling, will start to flower from around August. Ling is the most common species found on our heathland. It is a tough, wiry and sprawling plant with spikes of delicate pale purple flowers and tends to grow in tightly packed clumps. Bell and Cross-leaved Heath are both less wiry and bushy than Ling and tend to like more space between individual plants. Bell Heather favours dry ground, where its dark green foliage is beautifully offset by the deep magenta bell-shaped flowers. Cross-leaved Heath on the other hand prefers the wetter areas and gets its name from the distinctive whorls of four leaves along its stem. The flowers are a pale pink and bell-shaped and sit in a small cluster on one side of the stem. 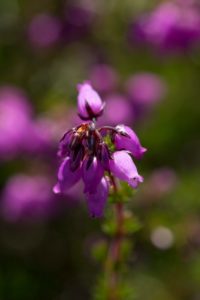 Heather was once an important part of rural life, in fact Calluna (the scientific name for Ling) actually comes from the Greek word meaning ‘to brush’, this being a reference to its use for making sweeping brooms. Other uses include an ingredient for tea, flavouring for ale, making baskets, thatching for houses and even as a fuel. Heather was even used to heal bites and stings from many a ‘venomous beast’. One of the more unusual uses was the use of whole heather plants to fill mattresses, which apparently made surprisingly comfortable and quite aromatic beds! 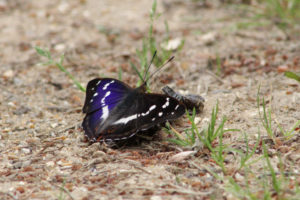 The emergence of colour continues across the Special Protection Area with some of our most beautiful butterfly species beginning to emerge. The first White Admiral were spotted at Bramshill, an elegant species with distinctive and contrasting black and white wings that make it one of our most handsome species. Widespread in Southern England its distinctive delicate flight, made up of short periods of wing beats followed by long glides, they are often found nectaring on Bramble flowers in woodland rides and clearings. Although a quite distinct species it can be mistaken for the larger and the arguably more stunning Purple Emperor, another species spotted flying around Bramshill Plantation. ‘Elusive he may be, but once encountered, the Purple Emperor is never forgotten’- This perfectly describes Britain’s 2nd largest butterfly, it is truly a stunning butterfly! Affectionately known amongst enthusiasts as ‘His majesty’ the male is an unmistakeable glossy purple above, with white bands across its wings and orange eyespots under the brown forewings. The females are brown and similar to White Admirals in appearance but also have the orange eyespots on the forewings and are also larger than of the two species. Often spending most of their time in the woodland canopy feeding on aphid honeydew, a pair of binoculars is often needed to get the best chance of seeing them during the flight period. This being said, males may be seen flying to the ground mid-morning to feed on salts and sugars in damp puddles, on animal droppings (yes even dog faeces!), road surfaces and even on carrion – something I imagine to be a rather disturbing scene! Enthusiasts wanting to catch a glimpse of this spectacular creature have been known to take advantage of this behaviour and entice males with banana skins and shrimp paste. Again, something I imagine to be a rather odd scene. 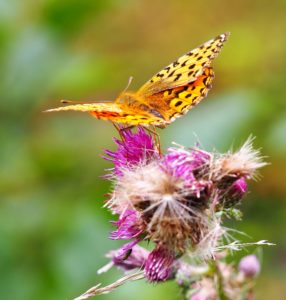 Adding to the eruption colour across the Thames Basin Heaths are two of our Fritillary butterfly species – the Silver-washed and Dark Green Fritillary. The Silver-washed is our largest Fritillary and gets its name from the beautiful silver streaks on the underside of the wing. The bright orange male really stands out as he flies powerfully along woodland rides, pausing only to feed or investigate anything with the slightest tinge of orange that could be a potential mate or rival. Keep an eye for the Valesina form which occurs only in females, the orange on the upper-wing is replaced with a bronze-green hue and the underwing can be a mixture of pink, blue and green. 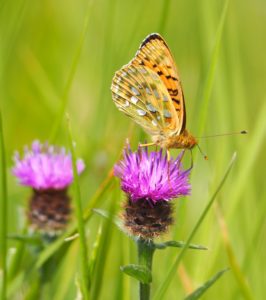 Dark Green Fritillary are our most widespread Fritillary and are named for the dark green hue on the underside of the wing which is also peppered with silvery spots. You are most likely to see this species flying over open habitats most usually calcareous grassland but also on a number of other open habitats such as heathland, woodland clearings and coastal dunes.

Ed: A very warm thank you to former wardens for contributing the photographs used in this article. Snr Warden Sarah