Here be Dragons: 50 Shades of Blue


Going through my Odonata ID books and I have noticed most pages feature a splash (or a whole lake) of my favourite colour, blue. I’m definitely not complaining, but when there are at least twelve damselflies that at a glance look pretty much identical, it gets a little confusing. So I thought we could pick out two species I have been seeing a lot of and decipher the differences!

The Common Blue and Azure Damselfly are very blue. Very blue with black bands. But there is a way to tell the difference! The Common Blue can be found on most waterbodies, including larger open areas, with the Azure preferring the small waterways. However there can be quite a lot of overlap in habitat use and a huge overlap in range! Essentially, the Azure has a small ‘U’ or whale tail shaped marking in black at the tip of the tail, and the Common Blue just has a solid black stripe. Easy right? You’ll just have to get up close and personal to find out! 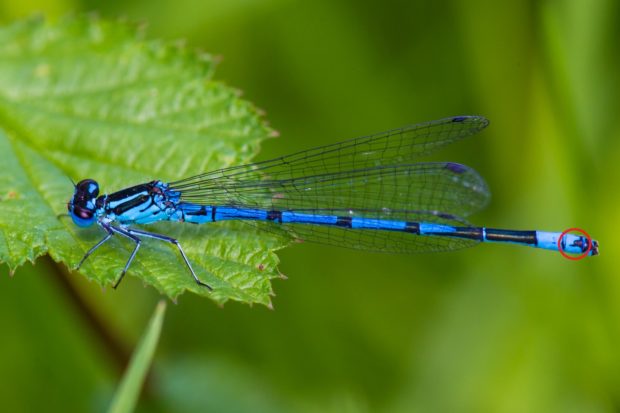 An Azure Damselfly male – check out the U-shaped black markings at the base of the tail, on the Common Blue this is just solid black! credit: Natural England/Allan Drewitt

Moving onto the dragonflies, and now is the perfect time to introduce my favourite one, the fantastically photogenic Broad-bodied Chaser. I fell in love with this species after one male set up a territory in my childhood garden pond, chasing off other dragonflies with loud angry buzzing wings. Just look at the picture below, tell me that’s not the best insect in the world? Before I get carried away I’ll also introduce three other species that be may be mistaken for a Broad-bodied Chaser (but they aren’t as beautiful!). 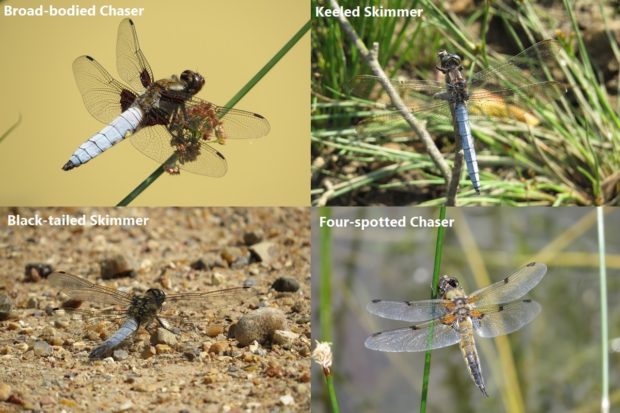 Photographs by our very own Michael

Easy…! The Keeled Skimmer is quite strongly associated with wet heathlands whilst the other three species are pretty common and can be found on most open waters and ponds. Just take your time and enjoy watching them buzz about and hopefully they will sit or hover still enough for a good look. I can thoroughly recommend bringing out some binoculars to help!

Heath Week 2019 begins this Sunday 28th July, featuring loads of great events around the Thames Basin Heaths including guided walks, craft events, talks and more. So check out the website for more information!

<< Here be Dragons: Buzzing in the Sky with Emeralds

Here be Dragons: Damsels not so in Distress >>