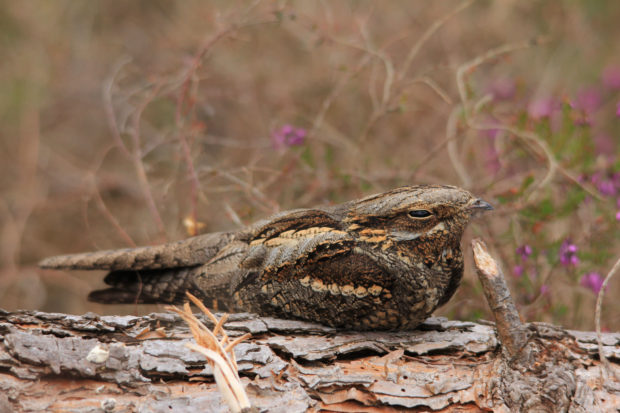 The nightjars arrive back from Africa in May. Their churring ‘song’ sounds nothing like other birds you’ve heard! © Rob Solomon
Click Image to Enlarge

Many of you will know your local heaths, places like Yateley Common, Horsell Common and Whitmoor Common. Perhaps, for many of you, they’ve helped you through this difficult year? But did you know these heaths, and others across Surrey, Hampshire & Berkshire, have a huge amount of legal protection, protecting them for wildlife and guarding them against development?

You might not think of busy south-east England as a hotspot for rare wildlife, but it really is! It may be criss-crossed by busy roads and have an ever increasing population, but by a fluke of nature it has the perfect geology and climate for a very special wildlife habitat: Heathland. If you’ve taken your local heath for granted, think again, this heather-clad landscape is rarer than rainforest!

Heathland birds aren’t part of the common-or-garden flock. And because a heath, by its very nature, is covered in low-growing shrubs, rather than trees, that’s where special birds like the nightjar, woodlark and Dartford warbler nest. On or near the ground, in amongst the heather and gorse! 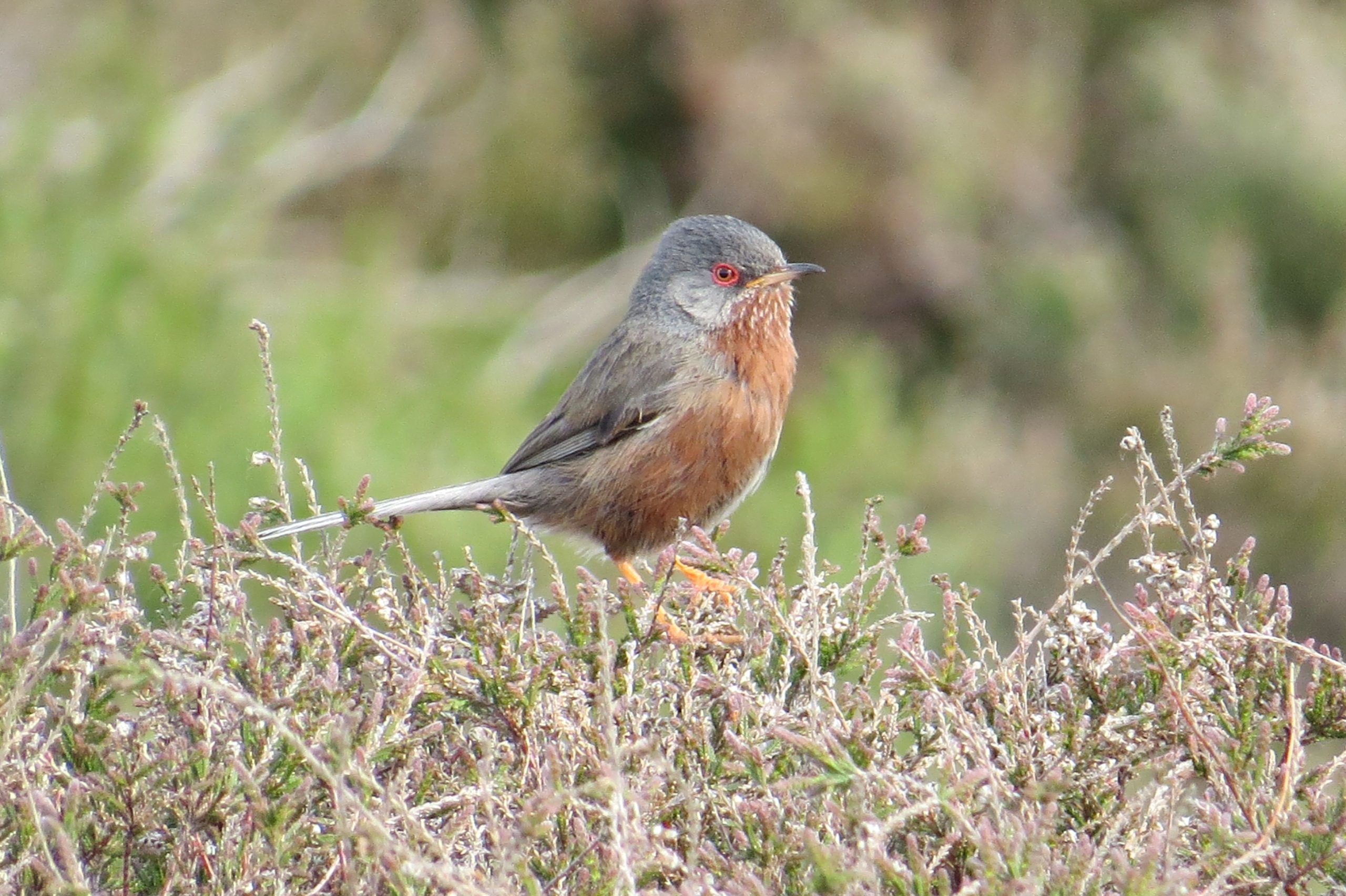 Dartford warblers are affectionately known as the ‘electric bird’. If you hear a bird that’s being electrocuted while trying to sing, it’s probably a ‘Dartie’! This one was photographed by our Education Officer, Michael.

Much of the magic happens at twilight

You could walk on the heaths everyday of your life and not see my favourite bird, the nightjar. But visit on a summer evening at dusk, and you’ll hear the strange, mechanical churring of the males, and maybe even catch a mesmerising glimpse of a bird in flight. Astoundingly, they come all the way from Africa to nest here on our heaths.

You might think that nesting on the ground in a heavily populated area would lead to a rather precarious existence, but these birds have been living and breeding alongside us for centuries. Only in recent years, with development on the up and a growing population with more leisure time, has their vulnerability become an issue.

Thousands of years ago heathland covered vast areas of southern England, but in the last century local heathland has shrunk dramatically and pressure is increasing. It’s now more important than ever for us to act together to protect this precious and fragile landscape for the future. In 2005 the heaths in this area of Surrey, Hampshire & Berkshire became the Thames Basin Heaths Special Protection Area and the Thames Basin Heaths Partnership is here to help you connect with it, protect it and enjoy it for years to come!

It’s easy to help and simple things can make a huge difference. When you’re out on the heaths, please keep to main paths and keep your dog on the path and out of vegetation.

Help prevent fires by following the code “No fires or BBQs, ensure cigarettes are out and take all litter home”.

Have you discovered ‘Greenspace on your doorstep’? It’s a directory of over 70 local country walks. By using them, you’re also helping the heaths. 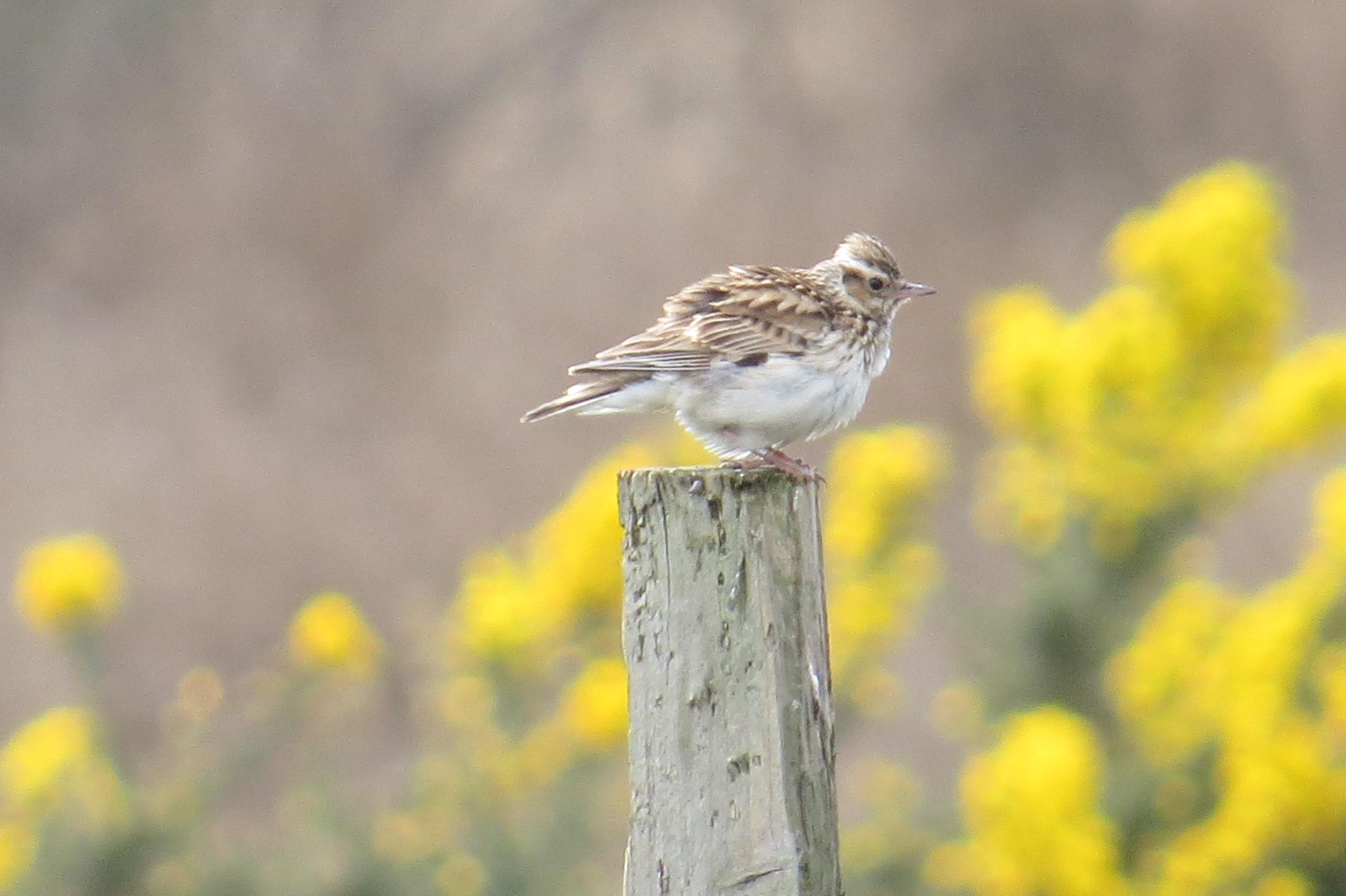 Woodlarks are our lyrical heathland songbirds. Their beautiful liquid song sounds expertly composed and has been rehearsed for thousands of years. This one was photographed on the Special Protection Area by our Education Officer, Michael.