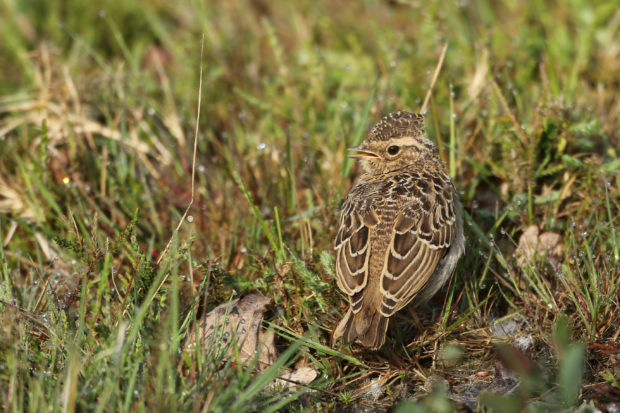 If a cat has 9 lives, I wonder how many a woodlark has? One lucky pair, observed by experienced bird surveyors John Eyre and Jim Baldwin, has dodged at least a couple of bullets this season already.

On 28th February, as part of their annual woodlark monitoring programme, John and Jim found a woodlark nest on the Ministry of Defence Training Estate. This isn’t unusual in itself as 50% of the Thames Basin Heaths Special Protection Area is owned by the MOD and is also home to internationally important numbers of woodlarks. What is more remarkable is how early in the year this was, one of the earliest nests John and Jim have observed in many years of studying woodlarks.

On their next visit, in early March, they confirmed that the nest had three eggs in it. Brilliant! But then came cold, wet weather. Surely disaster would strike! Sure enough, on 10th March, the nest appeared abandoned, wet and contained only three cold eggs.

Luckily the story doesn’t end there. On 16th March our two surveyors went back to check and, to their surprise, found the hen woodlark on the nest. But the circumstances worried them. A major military exercise was in progress, with a regiment of troops training nearby. Only a few feet from the nest stood a pair of large transport vehicles! A nest like this is almost impossible to see. It’ll be tucked into a tussock of grass and the birds are beautifully camouflaged, but the birds can only take limited disturbance. Would a second disaster strike?

We have a great relationship with the MOD and they take the conservation of protected wildlife very seriously. So John got on the phone to the Training Safety Marshall and he was quick to come over, move the trucks and tape off the nest.

It remains to be seen if this lucky pair are successful, but we’re all keeping our fingers crossed for them and hope they make the most of their higher level of special protection. 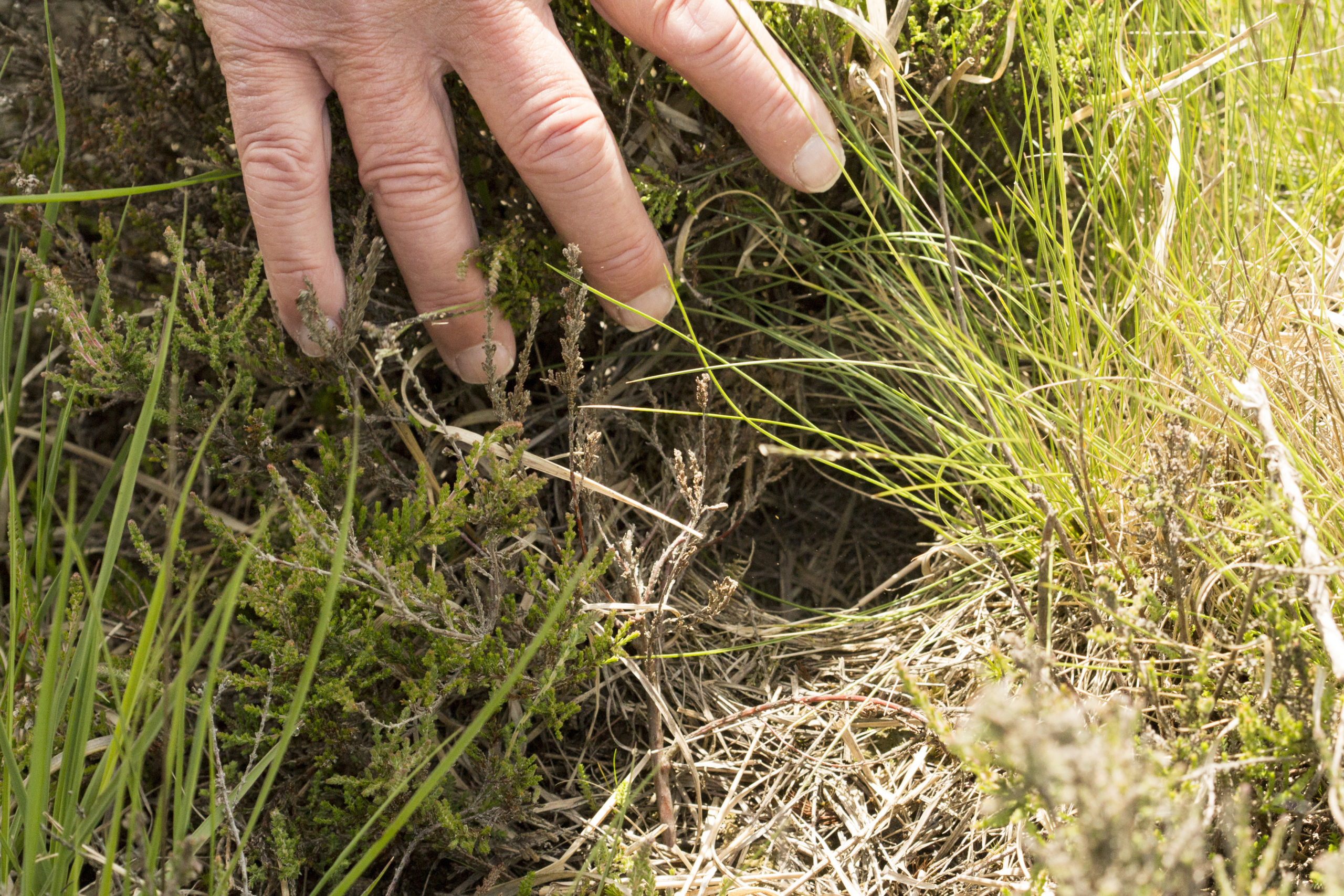 An abandoned woodlark nest from a previous season

Postscript 21st April 2021: Good news…the young birds are doing well. Here’s one, identified by its leg rings, photographed from a safe distance by the licenced surveyor… 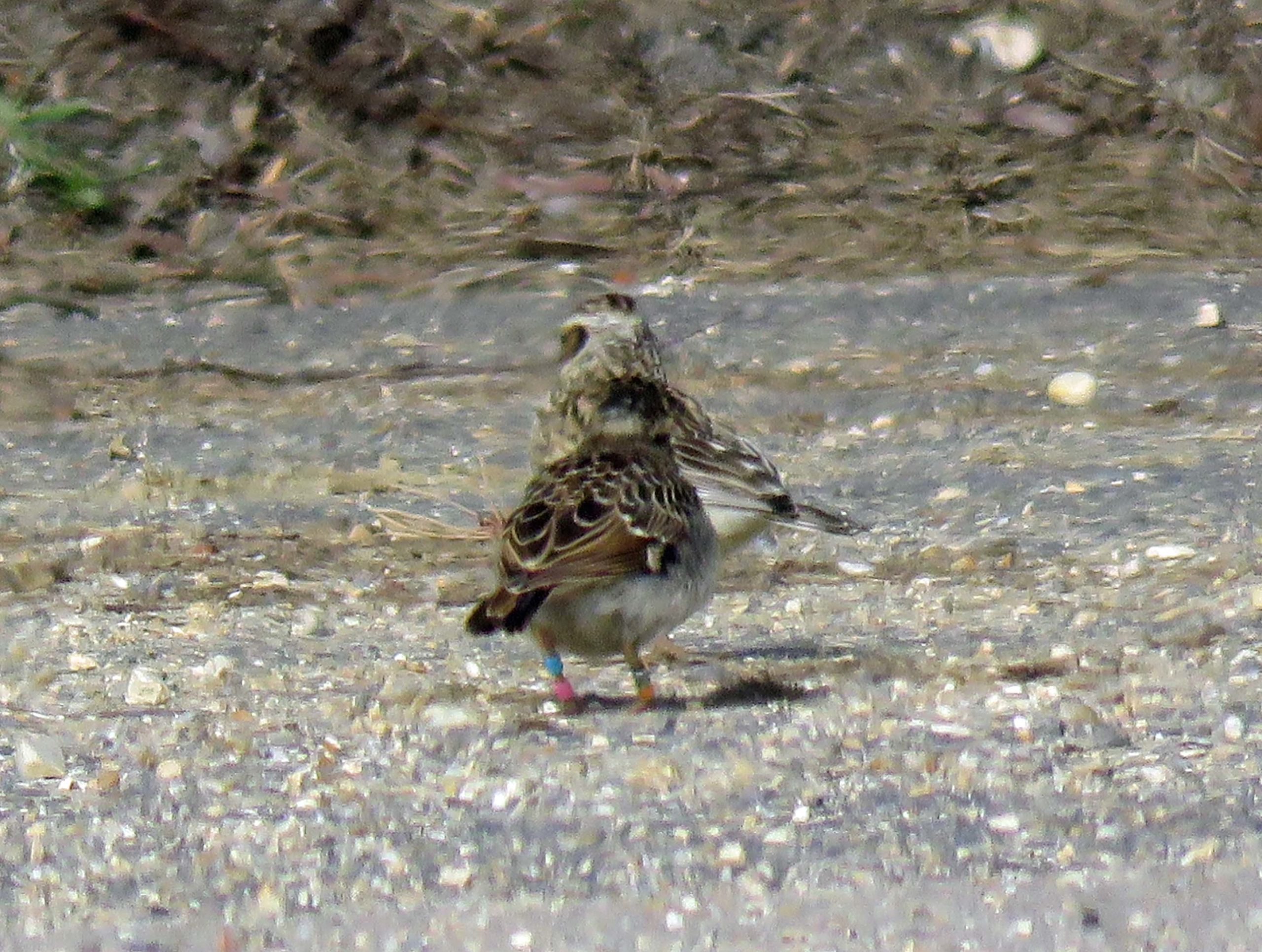 A young woodlark and its parent. Note the coloured leg rings.