The common lizard incubates eggs internally, giving birth to already hatched live young. They are smaller than sand lizards, with a highly variable number of colour morphs. They can range from black to brown to green, but mostly are a brown colour with spotty/stripey markings. Their tails are long, making up around two thirds of their total length. Listen out for the sound of them scuttling in the vegetation on a warm day. 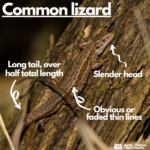 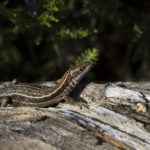 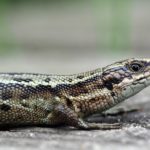 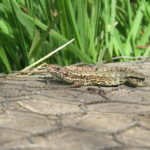 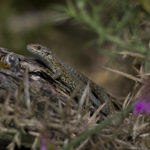 A very widespread species, found all over the UK through Europe and all the way across to the Pacific coast of Asia. In the UK they can be found across a number of habitats where there are sunny patches to bask in, with heathlands and coastal hills a particular favourite.

Like our other lizard species, common lizards can drop their tails if threatened by predators. If scared or grabbed, they can immediately shed the tail, which continues to shake to draw the attention of the predator so the lizard can escape.

Carnivores. They are mainly insectivores, eating any invertebrate they can get their jaws around, including worms.

A common species but has been identified as a UK Biodiversity Action Plan species as increased habitat loss and urbanisation is threatening their numbers.

On our blog: The early lizard catches the sun