Frequently mistaken for snakes, these reptiles are actually legless lizards, having adapted to a slithering lifestyle. They are slimmer than snake species and have a lizard head which includes eyelids and a much broader split tongue (rather than the slim fork of a snake). They are normally a copper brown or grey colour, with older animals a speckled blue. Unlike snakes they can shed their tails when threatened by predators. Known as a gardener’s friend, they will eat many invertebrate pests. 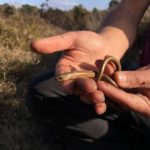 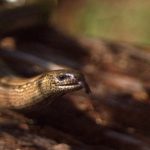 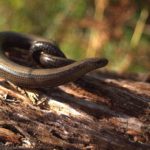 Another widespread species, they can be found all over mainland UK except Northern Ireland. They exist in a number of habitats, from gardens to allotments, heathlands to woodland, and even the sides of railway lines – as long as there is dense vegetation.

They are a secretive and adaptable reptile, a true generalist, and as a result they have evolved to co-exist with humans in more urban environments. They burrow in leaf litter and vegetation, keeping themselves away from predator’s eyes, and can even colonise compost heaps.

Carnivores. They use their curved sharp teeth to hold onto slippery invertebrate prey such as slugs and worms, and will eat a variety of insects.

A common species but at risk from urbanisation and new developments. They find it very difficult to colonise new areas, and suffer from habitat fragmentation.