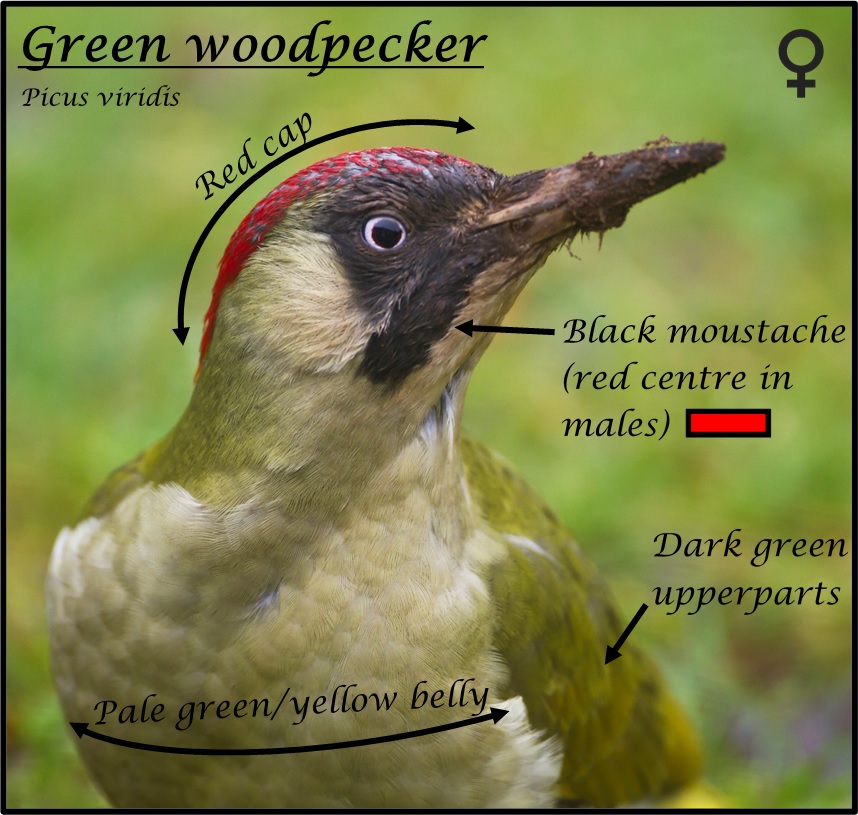 A little over a month ago I was startled by a large bird whilst visiting Brookwood Country Park. It was a gorgeous, sunny day and I only managed to see a bright golden/yellow flash as the bird darted past me and flew into the bushes ahead. I became rather obsessed to know what I had seen, and it wasn’t until last week that I finally got my answer! The giveaway was its distinct chuckling call…

Whilst I was very relieved to have solved the mystery, part of me was disappointed that it was ‘only’ a green woodpecker. In my mind, I had elevated this mysterious bird to such a height that anything less than a phoenix would have felt disappointing. However after researching the species, they are far more interesting than I had ever given them credit for!

The green woodpecker is a large, loud bird that you will typically see flying between cover whilst letting out its signature call, known as a ‘yaffle’. However, don’t expect to hear them drumming on trees quite as often as other woodpeckers. Their beaks are primarily used for digging into ant colonies, the main component of their diet, so don’t be too surprised to see them in your garden! If disturbed, they will swoop away in a deeply undulating flight, with 3-4 wingbeats followed by a short glide.

Their distinct colouration should also allow you to identify whether the individual is a male or a female. A black moustache can be seen on both sides of the beak, if it is entirely black (such as the image above) it is a female. If the moustache is filled with red, then the individual is a male. Juveniles can easily be identified as the normally plain green body is covered in black spots and streaks.

Check in next week, where I promise to actually talk about a gold coloured bird, the vibrant goldfinch.