In the last few months, I’ve spent many early mornings getting used to song thrushes repeatedly setting off my bat detector. In this blog I’ll be looking at how the song thrush can be differentiated from its similar looking relative, the mistle thrush. The two birds may look similar at first glance, but are the perfect example of why knowing bird song is important. There are differences in their appearance, though I’ll apologise in advance for the use of wishy-washy colour descriptions.

If heard, these birds can immediately be distinguished. The song thrush has an incredibly distinctive song, despite it singing countless different phrases! The key to identification is that the phrase will be repeated multiple times, and if you listen out for a while – they’ll often return back to a certain one (think of it as their favourite)! The mistle thrush has a song much more similar to that of a blackbird, but it always sounds a little unsure in what its singing. The song often stops abruptly, as though the bird has forgotten the words! If heard, the rattling call of the mistle thrush will give it away, it’s very loud and sounds like it belongs in a football stadium. 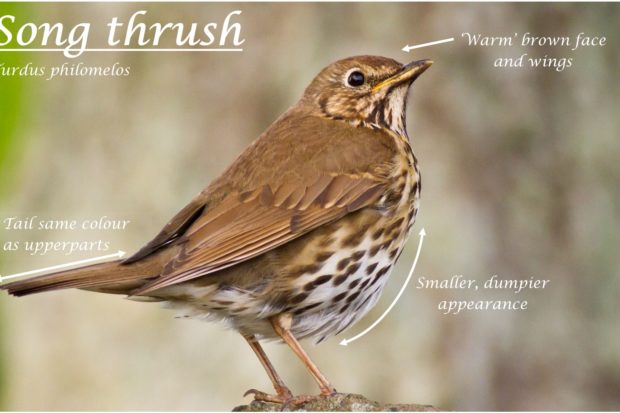 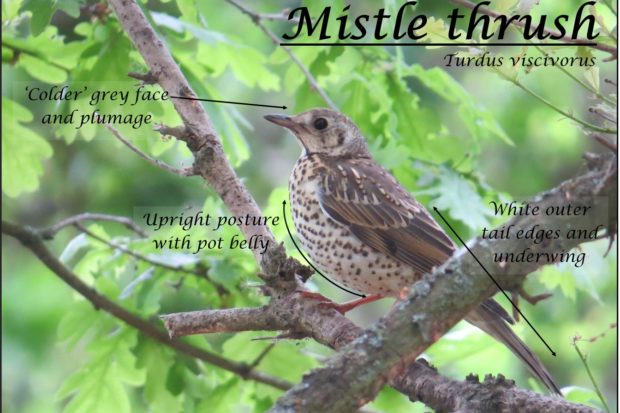 Next time you seen one of these birds, take some time to really observe its features and colour variation. It’s easy to assume that it’s the more common song thrush you’re seeing but it’s really rewarding to know for certain!