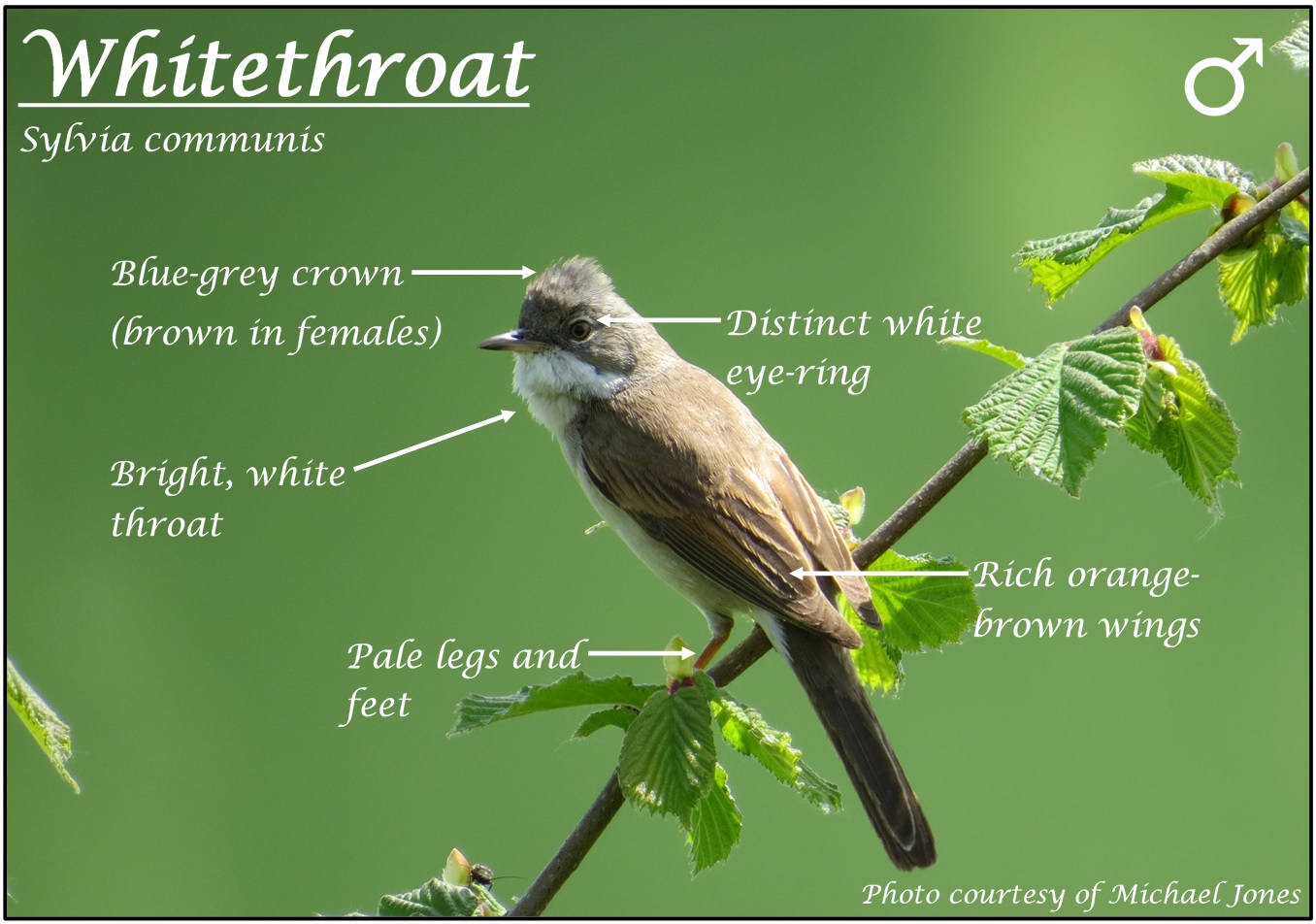 The heaths have been very busy the last month, with new summer migrants arriving each week. One of our most recent arrivals is the whitethroat, a medium-sized warbler.  This last couple of weeks they’ve been incredibly noisy, singing madly above scrubby bushes in an attempt to establish their territories. I had some initial trouble telling their song apart from the familiar Dartford warbler, so I’ll aim to give some identification tips that should make spotting the species (almost) nice and easy.

Whilst I had months to familiarise myself with the Dartford warbler song, the song of the whitethroat certainly threw a spanner into the works. Upon initial inspection, both sound scratchy and ‘warblerey’, however over time you’ll start to realise that the whitethroat song is more whistley and tuneful. The whitethroat utters much shorter bursts, whilst the dartford’s song seems to rattle on for a lot longer. I met a gentleman the other day who called the Dartford warbler the ‘electric bird’ and that really is the perfect description. If it sounds like it’s being electrocuted while trying to sing, it is probably a Dartford warbler, not a whitethroat…

There is a second, less common species of whitethroat, the lesser whitethroat. At a glance, they look extremely similar, with both species displaying a white throat and greyish head. To complicate matters further, they both share the same habitat of scrubby gorse and bramble bushes. If you can, try to get a good look at the back of the bird. The whitethroat will show a much richer orange-brown colour, compared to the very dull grey-brown of the lesser.

If you’ve got a pair of binoculars…or maybe a telescope, then there are a few very small features that will help with identification. The whitethroat is a much brighter bird, with very pale legs and feet, also with a bright white eye-ring. If looking at the lesser, expect to see dark grey legs and a dark eye-patch.

If it helps, try to remember the lesser whitethroat as ‘less’ colourful than its common relative. But do keep your eyes peeled for both of these species, as they really have arrived in full force – it feels as though every bush has one!