Sometimes, looking at your local heath you’d be forgiven for thinking you were looking at a barren landscape devoid of life, but take a closer look and you’ll see the incredible diversity of flora and fauna that make this habitat so unique. Heathland is an important habitat for many rare and wonderful invertebrates, some of which I’ve spotted over the last couple of weeks. One of these is the Red-banded Sand Wasp, a beautiful solitary wasp that is one of only two species of its family found in the UK. It is known for the unusual behaviour of mass provisioning caterpillars for its young. The wasp will dig a small shallow burrow in level sandy soil, she will then lay her egg and begin to gather caterpillars, some weighing more than 10 times her body mass. She will gather up to 5 or so caterpillars and then seal the burrow permanently, leaving them to fend for themselves. The larvae will have enough food to last through to pupation. This species may do this 10 times over the season, whereas their rarer relative Ammophila pubescens actually attends to their young throughout the larval stage and can be caring for up to 3 nests at a time. 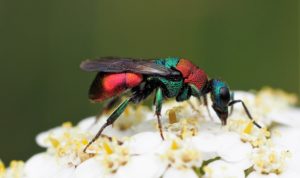 Another solitary wasp I have seen on my wardening travels is the fantastic Ruby-tailed Wasp. The head and thorax is a shiny blue-green colour; the abdomen is a deep ruby-red – and if seen close up, this is probably one of the most beautiful British insects. There are several Ruby-tailed Wasp species found in the UK that all look very similar and are difficult to tell apart, the most common of these is Chrysis ignita. Although lovely to look at, their other name (Cuckoo Wasp) points to a more sinister side of this insect’s lifecycle. They lay their eggs in the nests of other solitary bees and wasps, especially potter wasps and mason bees. When the eggs hatch, they eat the larvae of the prey species and may spend the winter in the nest before emerging the following year. This sort of behaviour is known as kleptoparasitism – literally meaning parasitism by theft.

One of these unfortunate victims, seen on the Thames Basin Heaths this week is the Spiny Mason Wasp. This species, like other solitary wasps, is known for its behaviour of mass provisioning for its young, this particular species mainly targets weevil larvae and may store up to 30 of these larvae in each individual cell, with nests usually consisting of 5-6 cells. That’s an amazing 180 larvae per nest! The unusual thing this species does though is the way in which it builds its nest. After digging a burrow consisting of several individual cells, the female will use the spoil to create a downward curved ‘chimney’ at the entrance to the burrow. This ‘chimney’ can be up to 30mm and there is very little consensus on the purpose it serves, some believe it’s to keep the rain off in exposed areas, while others think that it may deter kleptoparasites from predating the nests, either way it’s something you don’t quite believe until you see it! The particular species that parasitizes the Spiny Mason Wasp is Chrysis viridula one of those many cuckoo wasps that look very similar.

One of our wardens spotted a largish colony of Yellow-legged Mining Bee at Brentmoor Heath this week. Although one of the more common and easier to identify species, its range is restricted to the South of England. They get their name from the thick covering of yellow hairs on their back legs, although it is only the females that have these hairs, with the males looking overall slimmer in appearance. Like many solitary bees this species has its very own kleptoparasite, a species called Nomada fucata. 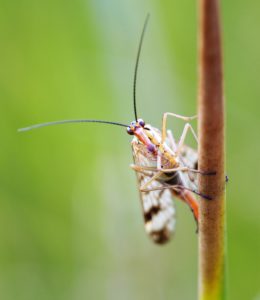 Another species spotted around the Special Protection Area this week is the unusual Scorpion Fly, a strange looking insect with a long beak like projection it uses to feed and a scorpion like tail that the males use for courtship. Mating usually takes place at night but this can be a perilous task as the female could easily kill the unfortunate males. To prevent this from happening the male usually presents her with a gift, this is either a dead insect or a mass of saliva! The unusualness doesn’t stop there, the Scorpion Fly mainly feeds on already dead insects and frequently steals prey from spiders’ webs. Scorpion Fly are often called ‘Living Fossils’ because they belong to the ancient order of insects known as ‘Mecoptera’ which dates back 250 million years, with many of these species barely changing in this time. It is believed this order were the ancient ancestors of our modern butterflies and flies.