June is the month of dragonflies! 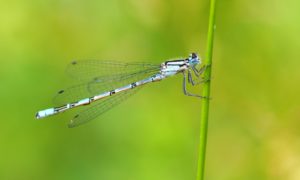 With May over, our summer migrant birds have arrived and thoughts now turn to other emerging wildlife on the Special Protection Area. June is the month of dragonflies! With easily 20+ species found on Chobham Common and up to 30 recorded on Bramshill and Warren Heath/Heath Warren, the Thames Basin Heaths is an amazing place to spot common and rare Odonata (order that Dragonflies belong to meaning ‘Toothed Jaws’). The first species I saw this year was a couple of Large Red Damselfly on Chobham Common, this distinctive red and black damselfly is usually the first of the year to be spotted. This species can be mistaken for the rarer Small Red Damselfly but as the name suggests it’s a more robust and larger insect with the black legs of the large red being a distinguishing feature. Most of the early emerging species have been spotted across the Thames Basin Heaths, from the common species such as Azure, Common Blue, Blue-tailed Damselflies, Four-spotted and Broad-bodied Chasers and Emperor Dragonflies to rarer species such as Downy Emerald and Hairy Dragonflies. The Downy Emerald, a nationally scarce species, is one of three Emerald Dragonflies found in Britain and one of two that can be found on the Special Protection Area, the other being the rarer Brilliant Emerald. Downy Emeralds like other emeralds have bright green eyes and as the name suggests are covered in downy hairs along the thorax. Other species to be on the lookout for during June include the beautiful Golden Ringed Dragonfly, Black-tailed and Keeled Skimmers as well as many others! 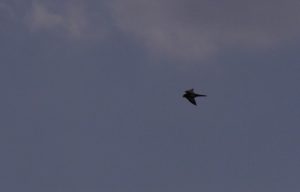 This emergence and abundance of Dragonflies provides ample food at the time of year it is needed most. Birds feeding their ever demanding young take advantage of the newly emerged and docile dragonflies and damselflies. Adult Odonata present a rather different problem, fast and agile it is sometimes difficult to keep your eye on them, never mind make a meal of them. One bird though makes it look easy – the Hobby. This summer visitor is the only British Falcon that spends the winter south of the Sahara, arriving back in the UK with our Swifts and Hirundine species (Swallows, House and Sand Martins). With close to 3000 pairs in the UK, mainly confined to the south of England, it is still a relatively uncommon bird, but it has recently gone through a population growth and has now spread to Scotland. The reasons behind this success are only speculative, but are thought to be linked to an increase in its dragonfly prey as a result of an increase in gravel pits and reservoirs, and also possibly linked to climate change. As a result the conservation status of the Hobby is green, and of least concern.

I spotted my first pair of Hobby on Warren Heath around 2 weeks ago, a day that also coincided with the best day of the year for the amount of Dragonflies I had seen. Hobbies also prey on Swallows, House Martins and almost unbelievably Swifts, one of very few birds that can outfly them flying at speeds of over 100mph! Hobbies exclusively use the stick nests of other birds, crows are usually the favoured species, but Sparrowhawk, Buzzard and Grey Heron and even squirrel dreys have been known to be used. Females do the majority of the incubation and male birds begin feeding females around 20 days before the eggs are laid and will continue to feed the female and young through to fledging. Hobbies breed on and around several sites across the Thames Basin Heaths so it is worth keeping an eye over ponds or on days when there appears to be an abundance of Dragonflies. 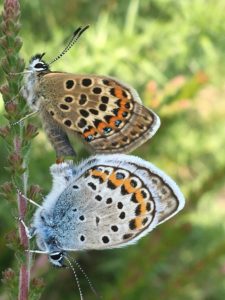 Last week saw the first sporadic sightings across the Special Protection Area (Chobham, Turf Hill and Hawley) of Silver-studded Blue butterflies, a species strongly associated with our heathland. This seems to be a little earlier than normal as the main flight period is late June. This week however things got into full flow with a mass emergence on Chobham Common, I lost count when I got to 60 or so mainly male butterflies. It was a spectacle I won’t forget, an amazing mass of blue just floating above the heather! This pretty little blue can occur in large numbers where suitable habitat exists, this being areas of a mixture of young and new heather growth with patches of bare ground in between. Although large colonies can exist, this species has gone through a large population decline in the last century, up to 80% across the UK, mainly due to habitat fragmentation and over matured and unmanaged habitat. Like many of the Lycaenidae family (Blues, Coppers and Hairstreaks) it engages in mutualism with ants, with the females laying eggs on all 3 species of heather, as well as gorse, and in places where there is a strong pheromone trace of the particular species of black ant. Once the caterpillar has emerged from the egg in March it is usually closely attended to by the ants and protected from predators, with the ants getting a sweet and sugary secretion as a reward. This continues through the chrysalis stage and even as the adult is emerging from the pupa in June it is often protected at this vulnerable stage. The sight is amazing to witness and something I managed to catch on video – see Thames Basin Heaths Partnership Facebook page, you won’t be disappointed! https://www.facebook.com/thamesbasinheathspartnership/.

If you would like to contribute to the conservation and understanding of this beautiful species of butterfly, you can record your sightings on the handy iRecord butterflies app (Download here https://butterfly-conservation.org/8803/irecord-butterflies.html ). It comes with a handy guide and over helpful information to help you identify species more easily and helps inform the important management work that goes into protecting and conserving our native butterflies.