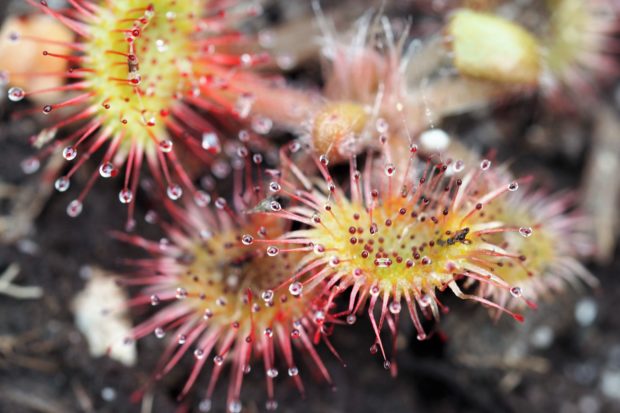 When the weather is good, the Special Protection Area just comes alive! From dragonflies to carnivorous plants, and everything in between, there is so much to be seen across the Thames Basin Heaths. The weird and wonderful Sundew has been emerging on wetter areas like Chobham Common and Wildmoor Heath. This crimson carnivore plant lures unsuspecting insects with sugary, glistening, leaves covered in tentacle-like glands. The sticky substance spells almost certain doom for anything unlucky enough to be drawn in by it. Once stuck, the Sundew begins folding in its glands one by one until the whole leaf turns in on itself. The ‘dew’ drops act as a digestive enzyme which eventually liquefies the prey, to be absorbed by the plant. A pretty gruesome way to go indeed! The reason Sundew species have evolved this rather grisly tactic is the type of habitat they live in. To survive the low nutrient and acidic soil they grow in, they need supplementary minerals from live prey. There are 3 species of Sundew found in the UK. The one most commonly found on the Thames Basin Heaths is the Round-leaved Sundew. This species can live for a remarkable 50 years! Be sure to look out in the wetter areas of your local heathland and you may just find this mighty little beast of a plant glistening in the sun.

Sticking to the red theme, two more little beauties spotted on the Special Protection Area this week are the Red-eyed Damselfly and the much rarer Small Red Damselfly. The Red-eyed Damselfly stands out from the rest of the blues as it has, as the name suggests, bright blood red eyes. It’s not a particularly uncommon species, but it does appear to have a more southern distribution in England and is less common than some of the other blue species. The males of this species will adopt floating vegetation, usually lily pads, as territorial platforms and defend them vigorously from other males. When there’s a lack of suitable floating vegetation they will lay eggs on the submerged stems of certain plants and will sometimes go down to over half a metre and stay submerged for up to 30 minutes! Something they are able to do by creating an air bubble around themselves as they mate. 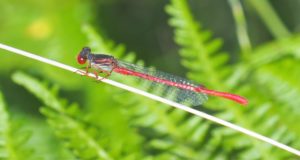 The Small Red Damselfly is a much scarcer species, restricted to the heathlands and mires of southern England and parts of Wales. Small Reds are at the very northern tip of their range in southern England and require very specific habitat and climate to survive, hence why even in suitable habitat they haven’t spread further north. They can sometimes be confused with the much more common Large Red Damselfly, but with close observation can be identified by three key features – males are completely red along the abdomen, they have red instead of black legs and the tiny spots on the wings known as pterostigma, again, are red instead of black. Because they are very susceptible to climate, this species will only fly in high temperatures and low wind. So if you want to spot them, this would definitely be the week to do it. Look around small unshaded boggy pools around Chobham Common and you may just spot one of these heathland beauties! 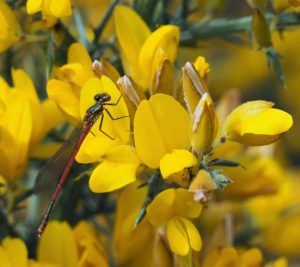 One of my highlights this week was watching a resident pair of Redstart on Barossa attentively feeding their young, taking it in turns to go back and forth to their nest hole in a dead tree on the edge of some woodland. They really are stunning birds! I also heard another Firecrest, the first I’ve heard on Barossa, and the 3rd I have heard or seen across the Thames Basin Heaths.

Spotted Flycatcher aren’t usually a bird associated with heathland, but some of the woodlands surrounding parts of the Special Protection Area are a great habitat for them, with one being spotted on Barossa. These understated and unassuming birds are one of our latest spring arrivals and actually come back around the same time as our local Nightjars. Another species that has gone through severe decline in the last couple of decades, the Spotted Flycatcher, with some estimates suggesting a decline of 89%. Flycatchers do what it says on the tin and this usually makes them easy to spot as they catch prey from their favourite perch. The reason they are able to do this with such ease is they have evolved a series of modified facial feathers, like bristles, down the sides of the bill, which help reduce the chance of escape. They have also adapted to catching stinging insects by rubbing the sting on the end of their perch, making it safe to eat.