With the recent good weather spring has kicked it up a gear and is now in full flow. Some of the highlights seen by our wardens across the Special Protection Area include some rare and beautiful species along with the odd spring migrant just passing through. A pair of Wheatear on Barossa and a pair of Common Sandpiper on Caesars Camp kicked off last week, both these species are spring migrants that will travel much further north before breeding. The lateness of this particular pair of Wheatear makes them good candidates for the Greenland race of Northern Wheatear, which means they still have a long way to go before they reach their breeding grounds. Large and varied sites such as Barossa and Caesars Camp are perfect stop off points for tired migrant species such as Wheatear as they provide cover and food for the last leg of their incredible journey which probably started somewhere in Central Africa.

A Firecrest was heard singing throughout the day at Wildmoor Heath last week. These tiny little birds, weighing only 5g, number only around 600 breeding pairs in the UK making us very lucky to have these enigmatic little birds here on the Special Protection Area. Ground-nesting birds have been very active recently, Dartford Warbler and Tree Pipit have been in full display across the Thames Basin Heaths area with the odd Woodlark still singing across some sites. Most of our summer migrants have now returned to the UK with the familiar melodic song of the Garden Warbler, the scratchy notes of Whitethroat and the unmistakable call of the Cuckoo all now common place. Some of the last to arrive are our resident Nightjar, the first of which started arriving last week. The bulk of this beautiful species arrives in the 2nd week of May and when they arrive they may have flown 10,000 miles since they left the UK the autumn before. 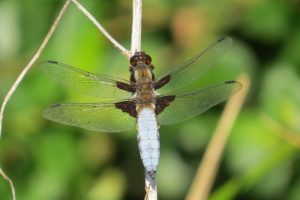 The weather has also helped with the emergence of a variety of invertebrates ranging from Dragonflies, Solitary Bees and Butterflies. Broad-bodied and Four-spotted Chasers, Large Red Damselflies, Banded and Beautiful Demoiselle and the Downy Emerald have all been seen on the wing in the last week. Green Tiger Beetles are a fairly common sight across most of the Thames Basin Heaths sites, although it may be difficult to see them. These ferocious little beasts can move up to 60cm per second which is around 60mph in our scale, although this isn’t anywhere near as fast as their Australian cousins which can move at speeds up to 220mph.