A magical world in the midst of busy south-east England 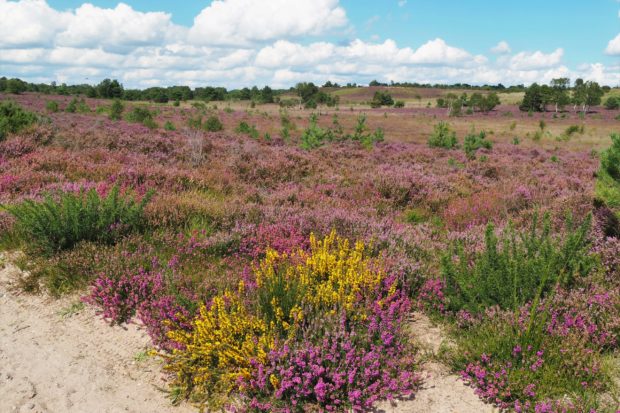 You might not think of busy south-east England as a hotspot for rare wildlife, but it really is! It may be criss-crossed by busy roads and have an ever increasing population, but by a fluke of nature it has the perfect geology and climate for a very special wildlife habitat. If you’ve taken your local heath for granted, think again, this heather-clad landscape is rarer than rainforest! 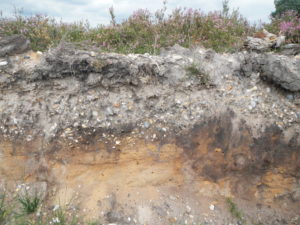 I’m talking in particular about the heaths across north-west Surrey, north-east Hampshire and into the southern part of Berkshire. Known collectively as the Thames Basin Heaths Special Protection Area.

As drivers speed past on the M3, they may not give the heaths a second thought, but they’re home to fascinating creatures you just won’t find elsewhere. Much probably goes unnoticed, but careful inspection reveals a magical world inhabited by iridescent beetles, weird-looking wasps burying larvae in the sand or laying eggs, cuckoo-like, in another wasp’s nest, and butterflies so beautifully camouflaged they’ll even turn into the sun so as not to cast a shadow!

A master of disguise when seen on a sandy track, the grayling butterfly (credit Rob Solomon)

Other magic happens in the twilight! You could walk on the heaths everyday of your life and not see my personal favourite, the nightjar. But visit on a summer evening at dusk, and you’ll hear the mechanical churring of the males, and maybe even catch a mesmerising glimpse of a bird in flight.

These ethereal birds are not part of the common-or-garden flock and, astoundingly, choose to come all the way from Africa to nest close to busy places like Camberley, Woking, Farnborough and Aldershot. They’re here purely because of the heathland and its rich pickings. And because a heath, by its very nature, is covered in low-growing shrubs, rather than trees, that’s where the birds nest. Right on the ground amongst the heather and gorse! 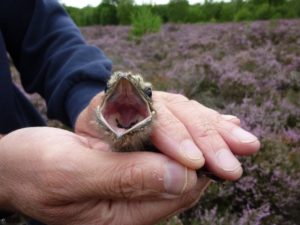 You might think that nesting on the ground, in a heavily populated area would lead to a rather precarious existence, but these birds have been living and breeding alongside us for centuries. Only in recent years, with development on the up and a growing population with more leisure time, has their vulnerability become an issue.

Look out for my next instalment, when I’ll be sharing more stories from the heaths and looking at strategies devised by the local councils to protect them, both for us and the wildlife that lives here.