It’s another must-win game for England if they’re to guarantee a semi-final place, even after a much improved performance saw off India in their last game. New Zealand will also be battling hard for a place in the last four, and if other results go their way, they can still progress even if they don’t win today. Pakistan and Bangladesh also have a chance to qualify as the group stage is in its final week. Nail biting stuff!

We’ve saved the biggest until last – the giant weta is the world’s heaviest insect! There are several species distinct to different islands – the one pictured here is the Cook Strait Giant Weta, weighing up to 70g! They’re flightless, nocturnal and vegetarian, favouring flowers as food.

The decline of the giant weta is a sadly familiar story, one of introduced mammal predators and habitat destruction, but conservation programmes are now trying to save these armoured antipodean arthropods. 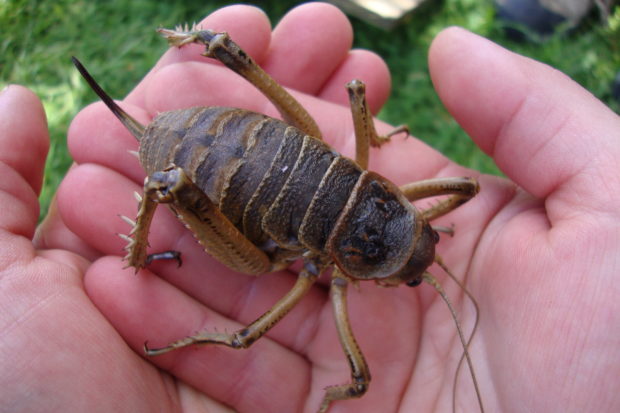 And just in case…

If the unthinkable happens and we don’t meet our trusty field cricket again, let’s recap what we’ve learnt so far…