Silver-studded blue butterflies: Can you help? 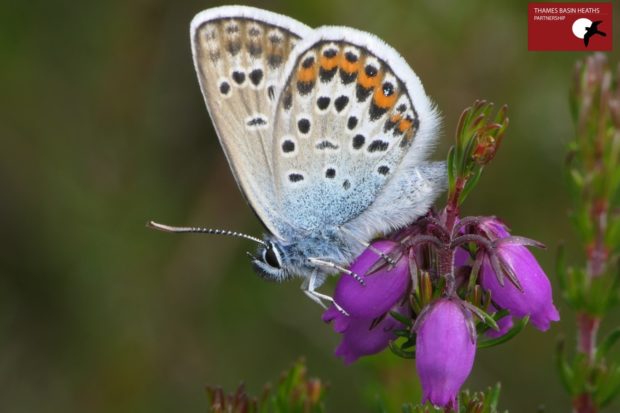 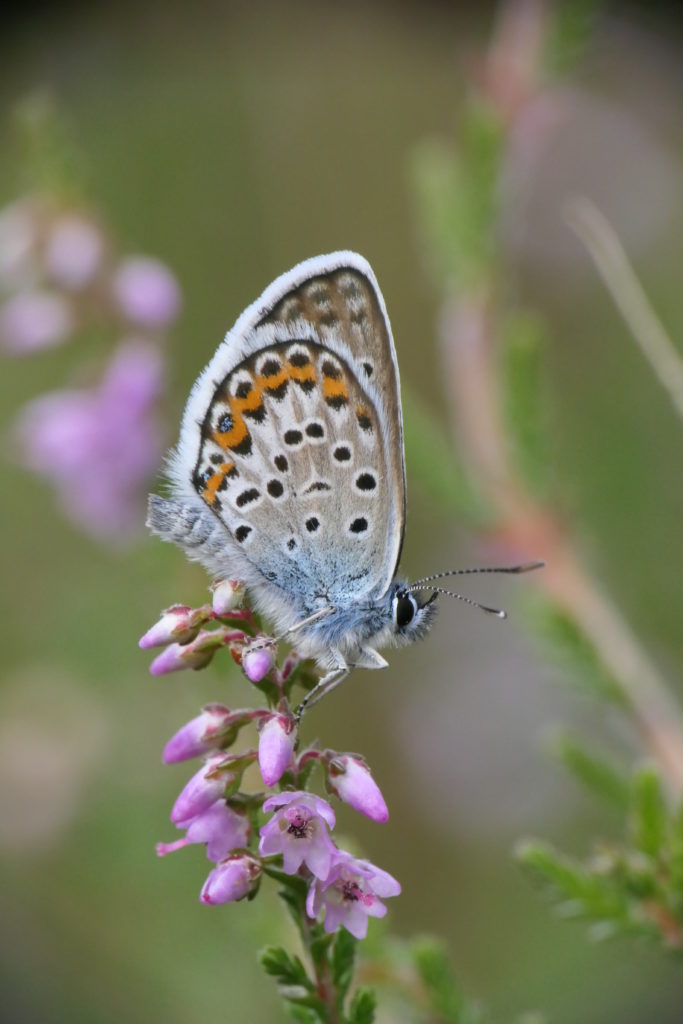 Male silver-studded blue butterfly perched atop ling heather. Note the silvery-blue spots at the rear of the hind wing.

If you visit your local heathland, we would love you to keep an eye out for one of the star species of the Thames Basin Heaths – The silver-studded blue butterfly.

The silver-studded blue (Plebejus argus) will shortly be starting its flight season and can be found fluttering low over short-cropped heather on our heaths into August.

They can be distinguished from other blues by looking for small silver-blue spots on the hind wing. On the upper side, the males are bright blue with a chunky black outline. The females are brown and are not as conspicuous. Read on to find out more about identification in more detail.

A species under threat!

Sadly, over the past century, the species has declined dramatically both in distribution and abundance. This decline – calculated to be about 80% – is due to factors such as loss of habitat, devastating summer wildfires and habitat becoming unsuitable, often through scrubbing over.

In the last decade or so, however, some excellent heathland restoration work has begun to arrest these declines. The butterfly responds well to targeted habitat management, but, due to its reluctance to expand to new areas, existing populations are always at risk. It is suggested that few silver-studded blues move more than twenty metres from their emergence site in their lifetime, often turning round if they encounter obstacles. 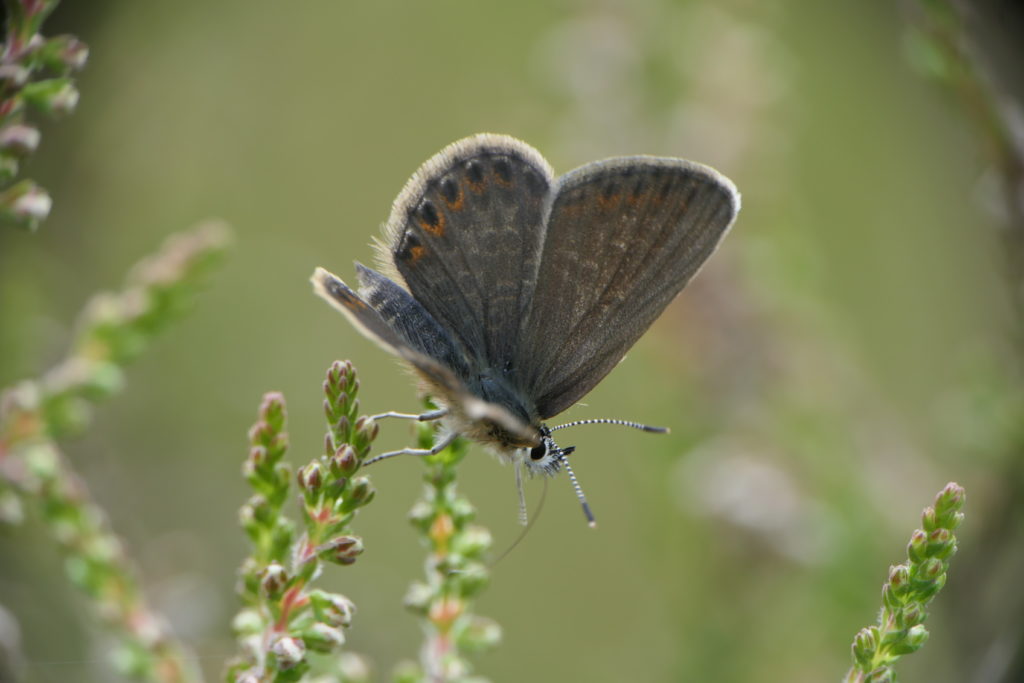 Female silver-studded blue. Like most of the UK’s blue butterflies, the female is brown

And now, over to you…

In order to get the best impression of how silver-studded blues are faring on the Thames Basin Heaths, it is really important to monitor where these butterflies are. Land managers may know where the big populations are, but there might be smaller populations lying undiscovered, spreading from existing colonies into areas recently made suitable through careful habitat management.

This is where you come in. As a visitor to the heath, you are in an excellent position to help record sightings of these butterflies, to build up a bigger picture of how this species is doing. As citizen scientists, you can be extra pairs of eyes and make a big difference! 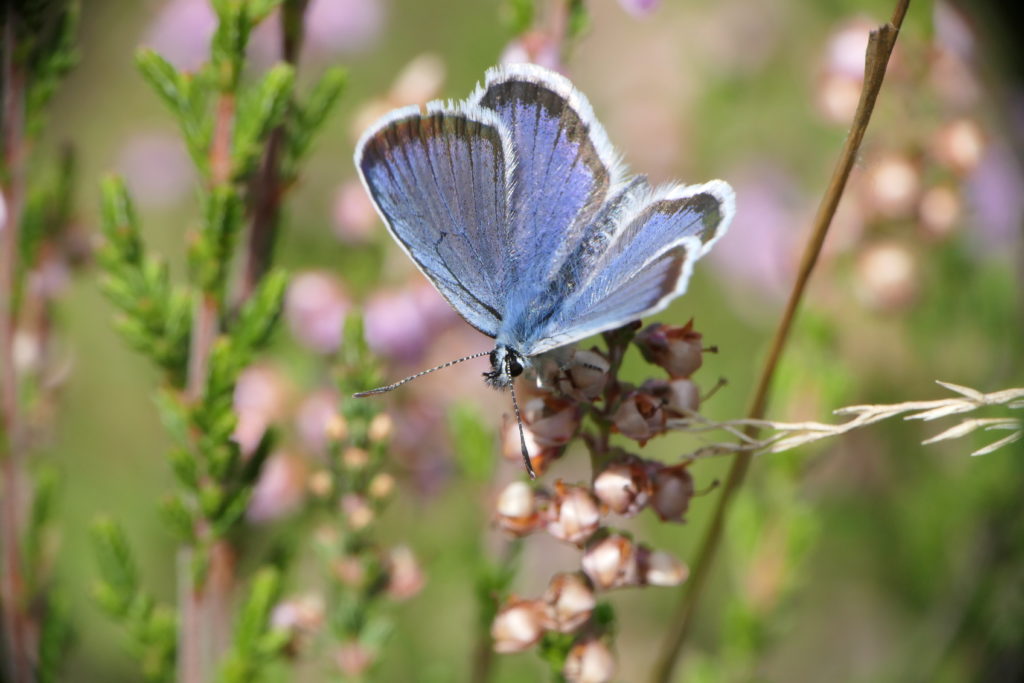 Male silver-studded blue. The broad black outer rim to the wings is a diagnostic feature

Silver-studded blues are often encountered flying low over short-cropped vegetation, so they are frequently found along the edges of paths and tracks that have been mown as fire breaks. On heathlands, they require a mix of young heathers and gorses on which to lay their eggs.

This means you can spot them without needing to leave the path! A fact that our ground-nesting birds will be very grateful for. 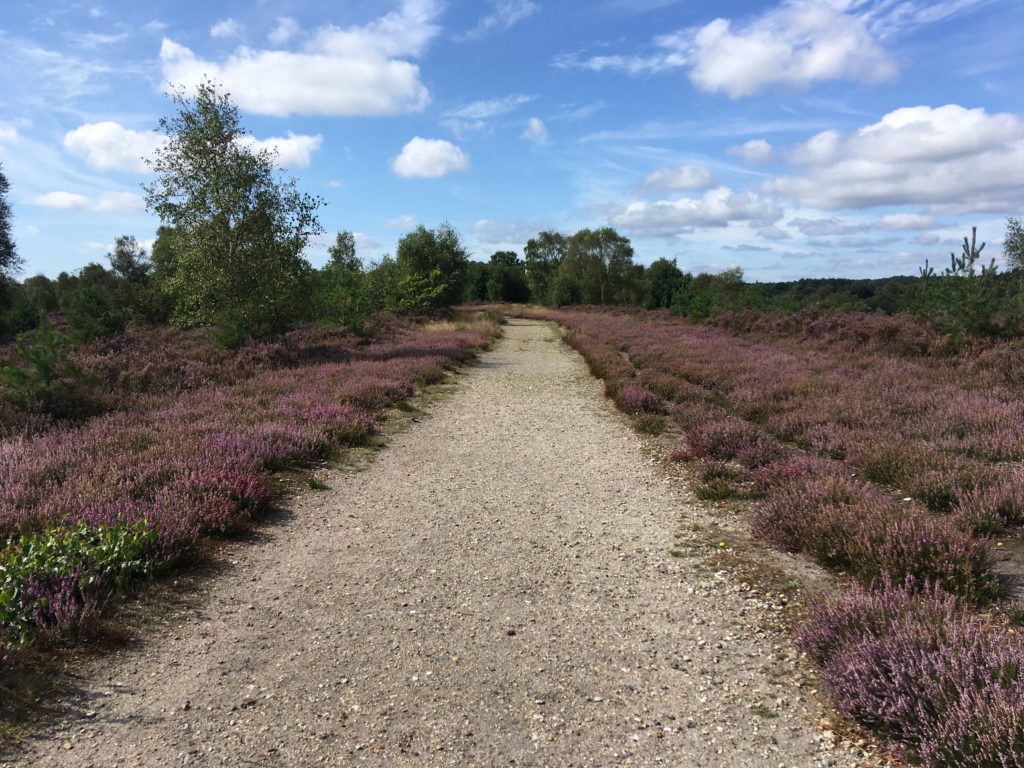 Between the end of May and August a wander along a heathland track like this – with low-cropped heather and mixed-age vegetation – could yield an exciting sighting!

The usual flight period of the silver-studded blue is late May /early June to the end of July. Numbers tend to peak at the end of June into early July. These dates can fluctuate depending on where in the country you are and on the weather in the build-up to the summer’s emergence.

If you see a blue butterfly on heathland, is it definitely a silver-studded blue? 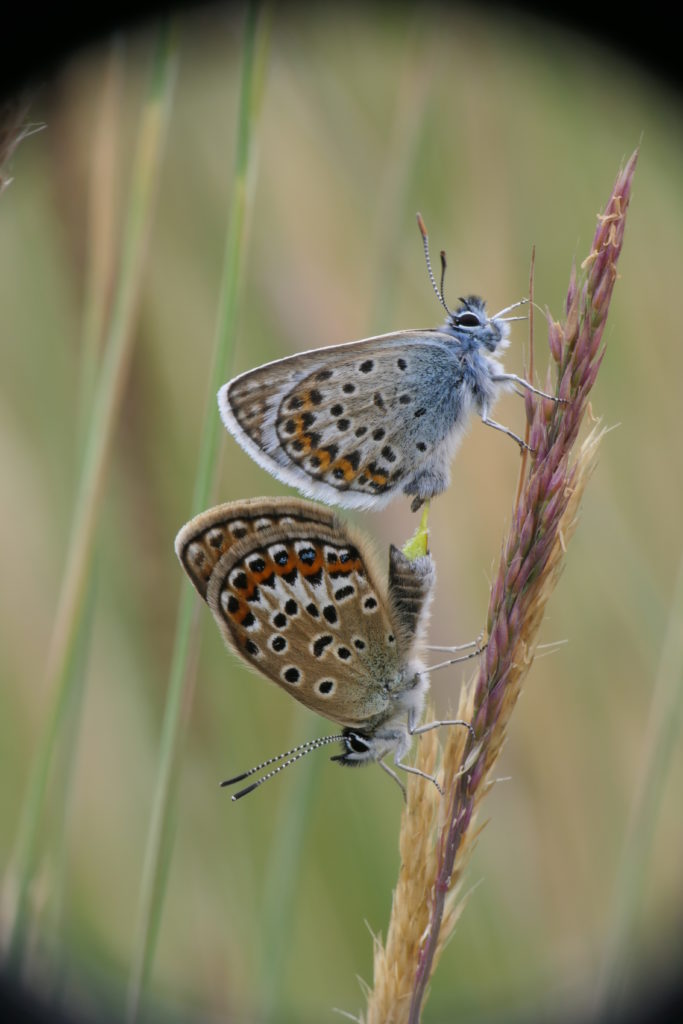 The short answer is no! There are other blue butterflies that could be potential sources of confusion, including common blue and holly blue. The brown argus is also similar in appearance to the female silver-studded blue.

That said, if you encounter lots of blue butterflies on heathland, they are highly likely to be silver-studded blues – but it is always important to check if you are going to record your sightings!

To find a more in-depth guide to differentiating the blue butterflies you might encounter on your heathland walk, click the button below to download a handy ID guide: –

Some simple ID pointers for male silver-studded blues – Download the ID sheet to find out more!

Should you just record silver-studded blues?

Well, that depends on you! You can record everything you see, from common to rare. All records are really useful in building up a robust picture of how species are faring. It can become a bit overwhelming if you try to record everything, so perhaps just start with the silver-studded blues and see how you get on.

We’ll be doing a similar call out for sightings of other species as the season progresses – like grayling.

Butterfly Conservation runs the Big Butterfly Count each year and it will be 17th July – 9th August in 2020.

The easiest method of recording what you see would be to download Butterfly Conservation’s iRecord Butterflies app – available both on iOS and Android. The free app 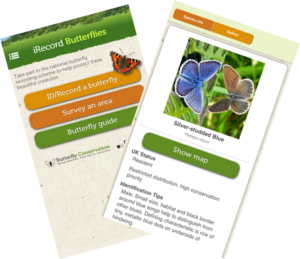 combines an excellent ID guide with photos and lots of species information with a simple-to-use recording tool. Just click ID/Record a butterfly, enter the details and submit.

It is really important that you are as accurate as possible with your recording.

If you can get a photo, this will help the verifier check the accuracy of the record.

We’d love to see your photos too, so please do send them to us via our social media channels.

The more people who use the app to record sightings, the better the picture of the distribution and abundance of the species generated.

Where can you find out more?

These websites are also great sources of information: –