The grayling is the UK’s largest brown butterfly and one of our most camouflaged species. Their mottled brown under wings enable them to blend in with the background and they always rest with their wings closed. They have a black eye spot on each forewing and can be identified on the wing by their looping flight pattern. 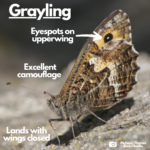 Grayling – Master of disguise! Click the image to find out more 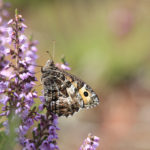 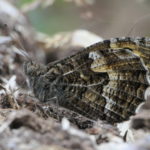 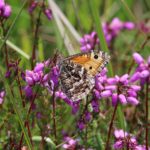 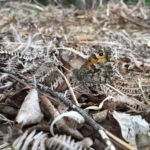 Graylings can be found flying along dry, sandy heathland tracks from July to mid-September. They can also be found at coastal sites.

Being territorial in nature, males tend to be easier to spot, whether perching on a patch of bare ground, tree stump or boulder, flying up to meet any passing object in the hopes of finding a mate. However, their fantastic camouflage enables them to disappear right in front of your eyes!

Graylings have amazing camouflage. Their cryptically coloured underwings help to protect them from potential predators, enabling them to disappear when they land. You will often find graylings flying up out of nowhere as you walk along the path.

Graylings can regulate their body temperature by orienting its body in relation to the sun. This tactic can also help in increasing camouflage by angling their wings to cast less of a shadow.
They have eye spots on their wings which enables graylings to surprise would-be predators.

Adult graylings will take nectar from a range of sources, including bell heather and brambles.

The grayling is a Biodiversity Action Plan (BAP) priority species. Showing decreases in distribution and population since the mid-1970s.