Dartford warblers are lowland heathland specialists. Unlike most other warblers, they don’t migrate south for the winter and are reliant of dense gorse to survive harsh conditions – sheltering and feeding within. They are identifiable by their distinctive red eye ring, slate grey upperparts and deep red breast. In flight, their tail looks long and is often cocked upright when perched. Their song is scratchy and buzzy, and often delivered from the top of gorse bushes.

They’re named after the Kent town of Dartford, where they were first recorded as a breeding bird in the 1770s.

Dartford warblers can raise three broods of chicks in a good season, with 4-5 eggs laid each time. They nest low down in dense heather or gorse. This provides some protection, but they are still susceptible to being disturbed. 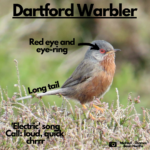 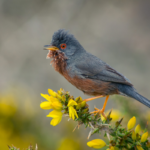 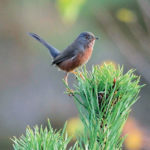 Dartford warblers are affectionately known as the ‘electric bird’. If you hear a bird that’s being electrocuted while trying to sing, it’s probably a ‘Dartie’! © Ralph Clark 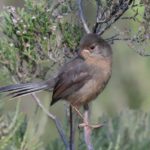 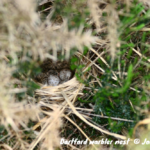 They can be found on lowland heathland all year round. They often skulk around in vegetation and are seen flying low between heather and gorse bushes. The best way to find a Dartford warbler is by finding a clear view of open heathland and listening for their buzzing contact calls to pinpoint a location.

Like other warblers, the Dartford warbler has a thin pointed beak that’s perfect for picking invertebrates from vegetation. They don’t migrate south for the winter, which means they don’t run the gauntlet of a long, perilous two-way journey. However, remaining in the UK is not without risk, there’s a chance of freezing or starving to death during harsh winters.

Dartford warblers are amber listed. There were 2,200 pairs recorded in the UK in 2017. There were 711 pairs recorded on the Thames Basin Heaths Special Protection Area in 2020. They’re incredibly susceptible to harsh, snowy winters and their population can crash dramatically. Their UK population fell to only 10 pairs in the early 1960s.