The woodlark is a bird of lowland heathland and recently cleared forestry areas. They require lots of bare ground on which to forage for food. They have brown upperparts and streaky pale underside, with a distinctive white stripe above the eye (supercilium) that meets behind the head. Superficially, it looks like the skylark, but is smaller and has a noticeably shorter tail.

The woodlark’s beautiful song heralds the start of spring on the heath. Its song has inspired many poets throughout history and both its French name – alouette lulu – and scientific name – Lullula arborea – onomatopoeically reflect the fluting notes it sings.

Woodlarks nest in tussocky vegetation on the ground and this puts them at risk of being disturbed. They can have two or three broods a season and lay 3-5 eggs each time. 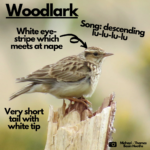 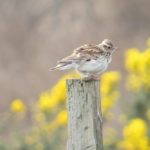 Woodlarks are our lyrical heathland songbirds. Their beautiful liquid song sounds expertly composed and has been rehearsed for thousands of years. This one was photographed on the Special Protection Area by our Education & Engagement Officer Michael. 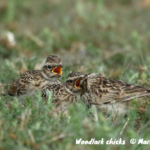 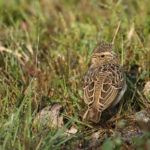 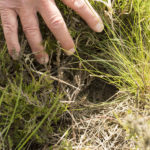 During the breeding season, you can find woodlarks on lowland heathland and recently cleared forestry. Outside of this period, woodlarks move to stubble fields and some may migrate to the continent. They are fairly inconspicuous, but can be found foraging on tracks. They will sing in a display flight and from a prominent tree, so this might help to pinpoint a location.

They feed on seeds throughout the year, but add invertebrates to the menu in the breeding season to take in extra calories. Their brown feathers help them to blend in brilliantly with their surroundings and keep them hidden from sight.

They feed on the ground, eating mostly seeds, but during the breeding season, they will eat invertebrates.

Woodlarks are green listed and there were 2,300 pairs recorded in the UK in 2016. There were 167 pairs recorded on the Thames Basin Heaths in 2020. They’re very fussy about where they breed and good habitat can quickly become unsuitable.