Nightjars are steeped in folklore and have been mischaracterized as goatsuckers and death birds! They are nocturnal and especially active at dusk and dawn. In flight, they’re kestrel-like in shape, with long wings. They have mottled brown feathers that make them almost invisible by day. The males have white patches on the wing tips and corners of the tail feathers – these are used to attract females and warn off other males. 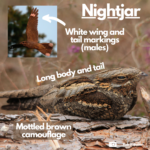 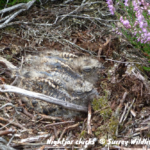 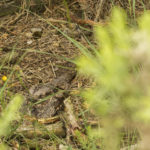 A camouflaged nightjar on the nest 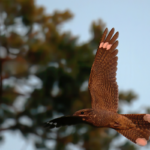 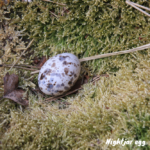 Nightjar egg on the ground © TBHP

Nightjars visit the UK in the summer – they’re migratory and can be found on UK heathlands, moorlands, coppices and forestry plantations. They arrive in May and most have left by the end of August. They are best found by listening for their distinctive churring, which is most evident at dusk and dawn.

They nest (and often roost) directly on the ground and their cryptic camouflage helps them blend into the background, reducing the chances of being spotted by a predator. Often referred to as ‘gapemouths’, Nightjars can open their mouths wide on two planes – this enables them to maximise the chances of scooping up flying invertebrates when hunting. Feeding is also aided by the presence of rictal bristles that line the gape. These help to detect food as it’s encountered in flight. As feeding takes place in fading light, Nightjars’ efforts are assisted by the presence of a reflective disc in the eye – the tapetum lucidum – that reflects light back through the retina. This can be seen as eyeshine in torchlight. Nightjars are migratory and spend the time outside the breeding season in sub-Saharan Africa.

Carnivores. Nightjars eat invertebrates (particularly moths and beetles) plucked from the air or by darting out from a tree branch.

Nightjars are amber listed and there were about 4,600 pairs during the last national survey. There were 404 pairs recorded on the Thames Basin Heaths in 2020. They are difficult to spot during the day because of their fabulous camouflage. Threats include loss of habitat, disturbance and reduction in the abundance of invertebrates. Population declines have been offset by practical habitat management.