Stonechats are small birds – about the size of a robin – that inhabit heaths, bogs and conifer plantations. The males look striking with a black head, white neck and orange-red breast with a mottled back. The females, not so vivid in appearance, being a mottled brown, with a dusky orange hue. They’re often seen sitting on top of gorse bushes flicking their wings and tail while making their distinctive call. The name comes from this call – some people say the sound is like two stones being tapped together.

Stonechats lay 5-6 light blue eggs, speckled with brown, in cup-shaped nests built on or near to the ground, sheltered by dense bush.

The scientific name Saxicola means “rock dweller” from the Latin for rock + incola, or “dwelling in”, and rubicola meaning “bramble-dweller”, rubus meaning bramble in Latin. 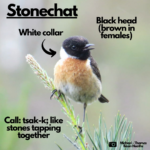 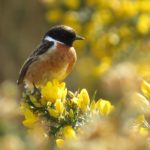 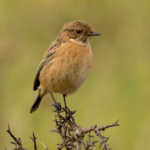 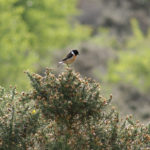 Stonechats can be found all year round on heaths, bogs and commons, particularly with gorse, broken areas with hedges and embankments. They mainly breed in the western and southern parts of the UK, and often disperse to coastal and wetland areas during the winter.

Omnivores. They eat invertebrates, seeds and fruit such as blackberries.

Stonechats are Green on the UK list of Birds of Conservation Concern.

Birding beginnings: Skittish stonechats
On our blog: A nature-spotter’s dream