The UK’s largest dragonfly. The emperor is the most territorial of all the hawker dragonflies. It emerges in late spring and flies almost continuously in the airspace above a water body. Its size, and its bright green and blue markings make it instantly recognisable.

Both sexes have a bright green thorax. In flight, the abdomen is often held in a drooping position. 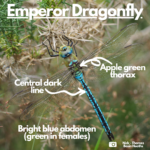 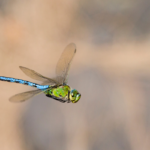 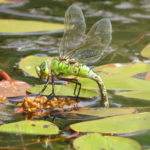 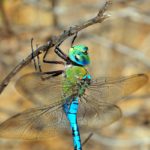 They can be seen flying from June to August, high above densely vegetated ponds, lakes, canals, ditches and slow-flowing rivers.

Adept at catching and eating prey in flight, males can fly higher that any of the hawker dragonflies, aggressively chasing away any entering its territory. Like other dragonflies, emperors have large eyes to spot prey, and powerful toothed jaws to grab victims in flight. Their streamlined bodies are is built for speed and their four wings, capable of independent movement enable flight in all directions, making the emperor a phenomenal predator.

Carnivores. They feed on insects, including butterflies and other smaller dragonflies and damselflies.

Emperors are common in southern UK, but has expanded its range further north and westwards in recent years.