The UK’s longest dragonfly. With its extra-long needle-like ovipositor (for egg laying), the female can measure up to 8.5cm long. It prefers the acidic running water of small streams and rivers on moorlands and heathlands and can be found hunting far away from its breeding site.

Large and long, with bright green eyes, a yellow and black striped thorax, and a black abdomen with alternating broad and narrow yellow rings. 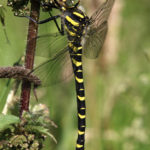 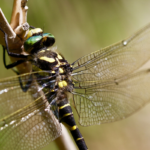 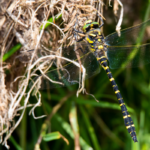 Flying from May to September, they breed in acidic waters of heathland and woodland, favouring sandy, silty and peaty stream beds that provide larvae with suitable hiding places. They also inhabit waters ranging from slow flowing rivers to small boggy channels.

As powerful and agile flyers, they can forage a long way from breeding sites, hunting widely over bracken, heather and gorse. Golden-ringed dragonflies are adept hunters. Like other dragonflies, they have large eyes to spot prey, and powerful toothed jaws to grab victims in flight. Streamlined bodies and wings capable of moving independently, make them formidable aerobatic predators.

Common and widespread in the west of the UK. More locally distributed elsewhere.