When you next visit your local heath look out for green tiger beetles on sandy paths. Try to look for them on sunny days and you will be rewarded by seeing an emerald green, jewel-like beetle, with long bronze-coloured legs. They’re quick on their feet, among the fastest runners in the insect world, but when they fly away from you, they will often land just a little further ahead of you on the path. 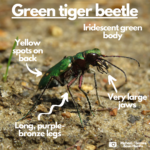 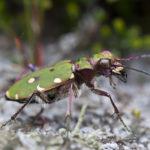 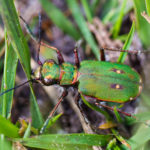 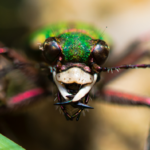 The adults are seen on sunny days between spring and early summer in bare sandy areas. Heathland tracks are perfect places to look for them.

They have large eyes to help spot prey and they’re called tiger beetles because of their huge, ferocious jaws. Their long legs enable them to chase down prey.

Carnivore. They’re very predatory. Their speed means they can chase and catch any insect they select to eat! Their larvae spring from the safety of their burrows to seize small invertebrates – especially ants – as they pass.

Fairly common and easy to see.

The Species Recovery Trust are asking us all to record sightings via Living Record and have included a set by step guide in their Green tiger beetle handbook.