The silver-studded blue is certainly the star of the show when it comes to butterflies of our heathlands. They fly low over short-cropped heather, often in large numbers.

The silver-studded blue is very similar in appearance to the common blue, but with some key differences. They are named after the small silver-blue dots on the underside of the hind wings. The upper wings of the male are blue with a broad black boarder and a white trim, the black is much thicker than that of the common blue, think sharpie compared to a biro.

Females are more of a dull brown colour, with black spots and hints of orange on the borders of the upper sides of the hind wings. 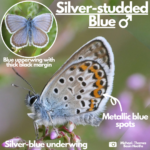 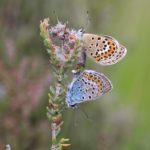 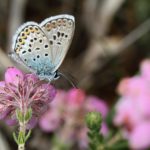 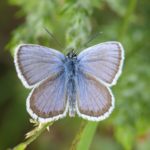 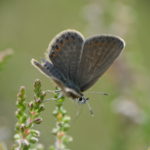 Female silver-studded blue. Like most of the UK’s blue butterflies, the female is brown © Michael Jones

The silver-studded blue can be seen flying from late May to August, with a peak in June. You are most likely to encounter this species flying. Look out for the bright blue males flying low over short-cropped, new growth heather searching for the far more inconspicuous females.

Adults roost communally, which can provide a wonderful spectacle first thing in the morning as they open their wings to catch some rays!

Silver-studded blue populations can be found on heathland and sand dunes.

Silver-studded blue caterpillars have a mutualistic relationship with black ants (Lasius niger). They secrete pheromones and a sugary like substance to attract the ants and, in return, these ants provide protection from predators for the larva and eventually the chrysalis. Sometimes, newly emerging adult butterflies can be seen with ants still tending to them. The ants are especially important to protect the larva from predatory wasps that look to parasitize the caterpillars with their own eggs.

Adults do not spend much time visiting flowers for nectar, but they can be found using bell heather and bramble. Larval food plants include gorse, ling, cross-leaved heath and bell heather.