The black darter is the UK’s smallest and only black dragonfly. As its name suggests, it ‘darts’ out to catch its prey, and can be observed flying above boggy pools from June to October. They can often be found sitting on dry cowpats and stones to warm themselves up.

With a narrow body and a distinct black panel containing three yellow spots on the sides of its thorax, black wing spots, a broad base to the hind wing and black legs. Through wear and tear, they get blacker as the season progresses. 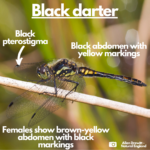 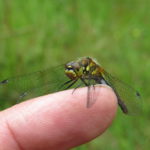 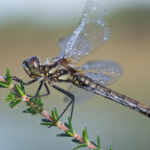 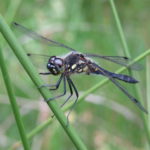 They can be found early in the morning, or on cool days, roosting around acidic shallow pools and lake edges in lowland heath. Black darters lay their eggs in open wet pool margins near emergent rushes and bog moss.

As is the case with other dragonflies, black darters have large compound eyes and powerful wings, which enable them to see and ambush prey quickly with a decisive dart out from a carefully chosen perch.

Carnivores. They use their powerful jaws to efficiently break down and digest insect prey.

Common, and locally abundant in lowland regions. More widespread in the uplands of northern and western UK.